While many want to deride it, I have no doubt the 2015 Asian Cup will be a massive success

The new Deputy CEO and General Manager Commercial of the 2015 AFC Asian Cup, Shane Harmon, wrote an article this week for SportBizInsider website on 'How to host a successful major event'. He should know, having successfully having held senior management roles for both the 2003 and 2011 Rugby World Cups.

In that article he wrote:

"As certain as death and taxes is media and taxpayer angst in the lead into the event. Do the purported benefits stack up? Would the money be better spent elsewhere?

Stakeholders must work collaboratively to define what success means and then communicate it. This can be in the form of attendances, visitor numbers, economic impact, legacy returns, increase in participation."

Well the taxpayer angst hasn't quite started yet, but already we've seen articles this week pop up questioning the viability of the event in such a crowded calendar. Eddie McGuire, in an interview with Frank Lowy for his Eddie McGuire Tonight program on Fox Footy, has been the most vocal.

"Those outside the FFA, we think it's (the 2015 AFC Asian Cup) going to be one of the biggest lemons of all time. Qatar handballed it to us, it's a poisoned pill we think."

Never mind the factual error of Qatar "handballing" it to us, sadly he isn't the only one with that opinion and this is where the Local Organising Committee must do as Shane says and define what success is. It isn't just the attendances. Australia has an infatuation in defining success or failure based on that one measurement, which is far too simplistic.

But let's look at attendances.

When Australia hosted the 2003 Rugby World Cup it was faced with similar challenges. Games involving Georgia, Romania, Namibia, Uruguay, USA, Japan were all scheduled to be played. I mean, we're not talking Rugby's elite here. Now let's look at the attendance figures for some of those games.

I'm sure the topic of "unattractive" games was a worry for the ARU in the lead up to the event, but they proved with good marketing, good ticket initiatives and community work that you can make these games attractive and you can attract a crowd.

There is no doubt the FFA will be hoping for selected countries to qualify, especially China, India, Indonesia, Vietnam and Lebanon. According to the Australian Bureau of Statistics, in 2006 these are the number of expats that lived in Australia, and in brackets the percentage that live in the three main cities to host the Asian Cup – Melbourne, Sydney and Brisbane:

And that is just the countries likely to qualify, although Vietnam could be a long shot. Countries such as the Philippines and Malaysia also have expat communities over 100,000. According to the 2006 Census, there are 1.95 million people in Australia of Asian descent, with more than one quarter of Australia's overseas born community being born in Asia.

If the Asian Cup can attract and entice these communities to attend it will already go a long way to providing respectable attendances.

That's before we even factor in travelling fans, of which the Local Organising Committee are predicting there will be approximately 45,000. You can always count on the Japanese and Koreans to provide a sizeable travelling contingent. And given the profile of those respective countries, there will be no trouble marketing the games in which they're involved.

But it's not just about getting these people in to give a boost to attendances, it's about engaging with these communities to make them feel a part of the event, but more than that feel a part of the Australian football family. And at the same time it is about giving Australia a glimpse into a different culture.

As anyone who has been to a J. League game will tell you, what is going on outside the stadium is just as important as what is going on inside. Outside is like a carnival, a fare with activities for everyone, adults and kids alike. All a part of ensuring the J. League clubs have strong links to their communities.

The Asian Cup should take a leaf out of that book. The LOC should invite the communities of the two competing nations to set up similar outside the ground to give people walking to the ground the chance to experience some true Thai, or Indian or Omani culture. The Asian Cup should be used to educate fans not just on Asian football, but Asia in general. We're in the Asian century, Asia will become more important in our everyday lives as the century goes on and we should use this opportunity to play a part in that process.

As Les Murray pointed out in his blog today, the television audiences for the Asian Cup are potentially enormous and this is one of the major factors in determining the tournaments success. For this, the FFA and LOC will be hoping for a little bit of luck and hoping that the major markets – China, Indonesia, Thailand, Vietnam and India – all qualify.

The TV reach of the 2011 AFC Asian Cup in Qatar was 2.5 billion. Although "reach" is one of those terms that doesn't really mean a whole lot. But the tournament was delivered to more than 484 million people, 32% of those in China.

The 2004 AFC Asian Cup in China, that event that convinced FFA chiefs they must become part of Asia, shows the potential of the tournament. The final between China and Japan was watched by 250 million people in China alone, a staggering 43.1% of people watching television in China that night. In Japan the figure was about 38% of all people watching television. And that's just for the final.

Some have thrown up the fact Australia will be playing India in the cricket at the same time as a problem. No, it's an opportunity. We know the fanatical support the Indian cricket team receives when they play in Australia. If India qualify, leverage that support that will already be in town and encourage them to watch their national Football team play.

The Australian Open Tennis is on in Melbourne. Again, an opportunity.

The Australian Open brings in tens of thousands of international visitors, many from Europe and South America, and increasingly Asia. Quite often they are Football fans too. Tap into that, market at these people, encourage them to come along. With Asian representation in Europe's big leagues growing every year I'm sure there would be some interest in watching a game or two, perhaps even involving a player from their own club.

But these events shouldn't be viewed as rivals for the Asian Cup. Australia has proven time and again it is capable of handling multiple major events at the same time, January 2015 will be no different.

So while some will continue to death ride the tournament, and in the case of people like Eddie McGuire no doubt hoping it fails miserably, I can't help but see the positives.

The future is Asia – and in January 2015 everyone will see why! 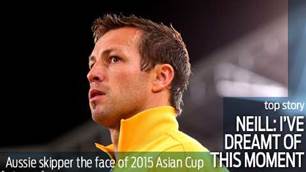