It’s taken a couple of days to get to this article, with all the travelling, but that’s given me some time to think about our performance in the first match against France...

My main takeaway point is this: Australia has a bloody good team! Forget the underdogs tag! Forget the brave minnows! We have a seriously talented team and ought to be confident of getting out of the group.

Football is both a simple and a complicated game. Simple, because if you can trap, pass and move well enough you can make it to the top. Complicated, because technical skills are just a part of what it takes to win a World Cup match.

We were compact and disciplined in defence, we closed down the key French passing lanes, we asked a few questions in attack and we had a number of world class individual performances.

Check out what the 442 FM team in Russia think about our World Cup Socceroos.

Aaron Mooy, for me, was the best player on the pitch. Some Huddersfield supporters, despite naming him the best player ever to pull on a Town shirt, seem to think him a bit slow. Well he wasn’t slow at Kazan Arena. He was lightning quick with the ball, ferocious in the tackle and (mostly) outplayed his more illustrious opponents - Pogba and Kante. He was outstanding in his last season for Melbourne City but the player who galvanised Huddersfield’s promotion and then survival in the EPL is a vastly improved animal. He wouldn't look out of place in any team.

Then there was Trent Sainsbury. Readers of my work might remember I was calling for his inclusion in the Socceroos when he was still at the Mariners. He’s always been very fast, great in the air and strong in the tackle, with also an excellent passing range. His game against France was one of the best defensive performances I can remember by a Socceroo since the Class of 2006. There were too many fantastic moments to list here but that acrobatic tackle on Hernandez towards the end of the first half would have had the top agents of Europe reaching for their phones. He was immense.

Mark Milligan also had a great game and Mile Jedinak had one of his better games in a while (although played a few tired passes towards the end). On another day he might have been replaced by Luongo with 20 to go but I understood the need for Jackson Irvine, and after we went 2-1 down it was definitely Daniel Arzani time to try and create something out of nothing. Very pleased he’s now locked in as a Socceroo.

All of the players did well but the other I’d like to single out for special mention is Andrew Nabbout. A few judges only gave him a bare pass but I must have been watching a different game. Nabbout was utterly unrelenting in closing down the French defenders, reducing the time they had to commence attacks and occasionally winning headers against some of the best players in the world. This bloke gets up like Timmy Cahill! I hope Van Marwijk persists with him because he had a strong impact on the game with very few opportunities in attack.

In the end, we might actually have won the game. A terribly unlucky deflected goal (that crossed the line by millimetres) and an appallingly bad VAR decision – take those out and Australia upset one of the favourites.

As for the VAR, it needs to be abandoned until all refs have the same understanding of the words “obvious error”. There is bitter disagreement among fans and commentators as to whether Risdon clipped the ball first (I think he clearly did), so if there’s still disagreement after a frame by frame dissection, how on earth is that an obvious error?

On the other hand, every time the Australians were in the French box they were being pushed, pulled and held back. Not once did the VAR see anything worth directing the ref’s attention to but if, for instance, he’d looked at this blog photo he would have seen enough for two penalties. Irvine is being held down and Mile is having his shirt pulled at a corner. This image is not open to interpretation like the Risdon event, they are clear fouls. Why did the VAR ref see something that arguably didn’t happen regarding Australia, but NOT see the many things that definitely did happen regarding France? (Neymar and Harry Kane might be asking similar questions.)

That’s what we get for not being part of the FIFA top 10.

Having said that, looking forward to the next match, we can take a lot of confidence for where we really stand in world football. France is a top ten nation and we just about beat them. The Danes will be very worried about us, and so they should be. 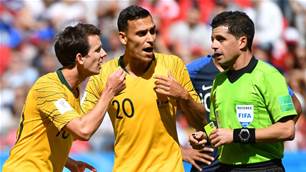 'I've never been a fan of the VAR' 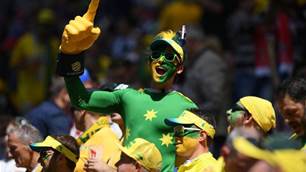