If the AFL or NRL were truly worried about the sleeping giant of football, they could have done worse than to blow up the Jamberoo Pub this weekend. It would have set the football narrative back 50 years.

There may have been no A-League over the international break weekend, but there was plenty of action at Jamberoo where the inaugural Football Writers’ Festival was held – arranged by Bonita Mersiades.

My head is still reeling trying to summarise all that was wonderful, challenging and enlightening over two jam-packed days so I’ll just limit myself to a few observations.

Contribution to the narrative of football in Australia may be in just a few hands as far as the professional (and semi-pro) media is concerned, but there’s a hell of a lot of passion and talent out there – even if it has to be constrained within 500 word articles in the mainstream press.

As for passion, few have more than Jens Weinreich – the German investigative journalist who has made a career from exposing corruption in high places. The words “criminal” and “criminal organisation” have rarely been used so frequently in just one hour.

A recurrent feature of the two days was the importance of history. Even the most committed fans (for the most part) are unaware of the deep antiquity of Australian football. Ian Syson’s book: The Game that Never Happened: The Vanishing History of Soccer in Australia is a book that deserves a wide audience – especially for those that want to be proud of our game.

Ian suggested that one of the biggest things holding the game back is shame – the perceived shame of being involved in a game that came from elsewhere. A deeper knowledge of the game’s indigenous roots can help that condition.

Given the massive rise of women’s sport in the last few years it was appropriate to have so many contributions from female players, coaches, journos and administrators. Inevitably, much of the talk was about inequity (and fair enough too). We’ll know that women will have attained their rightfully equal place when we no longer have to talk about equity – or even mention the fact that a presenter is a woman.

As far as journalism and commentary is concerned, I suspect that day is not too far away, at least in this country.

One of the more anticipated sessions was the football activism session featuring Craig Foster, but also some pretty interesting other people in Jens (reprising), Matthew Hall (The Away Game) and Jaimie Fuller (sports businessman and FIFA gadfly). Being at this session was one of those key life moments when you realise you are present where history is being brokered. Very inspiring stuff.

I got to ask Fozzie how he felt about the negative side of the Hakeem coin; i.e, that for all the support, a surprising number of Australians felt that his campaign was ill-conceived and unfair, because it helped just one lucky man because he was a footballer. What about all the “nobodies” still incarcerated because they don’t have a famous champion?

Fozz explained that he had heard that argument a lot and yes, he was depressed that he couldn’t help everyone, but that didn’t stop him from being very inspired by what the football community had achieved.

He was at pains to emphasise that it was the community that had achieved the success rather than any individual, and the lasting result may well help a lot of people beyond Hakeem because of the scrutiny thrown by the football community onto the unfair rules and regimes that imperil so many other lives.

Chis Nikou closed the two days by submitting to a fearful grilling from a room full of people who represent a very wide diversity of perspectives. He fared worst in trying to deal with the angry questions regarding the FFA’s impending AFC vote in favour of Sheik Salman.

For a lawyer, he came across as unconvincing when he said there was no abstain option in voting for the AFC president. It had to be yay or nay, he said, even when Jaimie Fuller confronted him with the AFC statutes.

He did (to my mind) a lot better when questioned about his hopes for the future of the game, not least his confirmation that the Central Coast Mariners could not lose their licence while they remain compliant with the conditions (which they currently do) although some in the room seemed surprised by the implications for the 2034 licences.

This reporter suggested some months ago that the existing license structure meant that promotion to the A-League may be possible, but none of the current clubs could be relegated before 2034 unless the entire licence system was changed.

What moron of a club owner would agree to the possibility of relegation before 2034?

This state of affairs was confirmed by Nikou but it seemed to take a lot of people in the room by surprise. I don’t know whether to be proud I got this right ages ago, or depressed that – obviously – just about no-one in the mainstream professional media reads my articles.

Nikou did say that if he could achieve just one thing during his tenure it would be the unification of all tiers of the game. That would be amazing, given the tribal plurality of Australian football and I certainly wish him well, even though he has as much chance of doing that as reconciling Israel and Iran.

The last word goes to Bonita Mersiades (Whatever It Takes) who has devoted her professional life to loving Australian football, despite the fact it has rarely loved her back. The Football Writers’ Festival was her moment.

The standing of the presenters, the quality of the presentations and the smooth running of sessions made for a huge success. I expect the festival to become a regular feature of the Australian football AND literary calendar and to become very popular among the football intelligentsia.

It’s worth mentioning also that Bonita has poured her own money into starting a new publishing company (Fair Play Publishing) with a focus on football. Any new publishing venture these days is fraught with problems – not least distribution.

Maybe the football community could play its part by at least checking out their website to see what’s available. After all, if the weekend demonstrated nothing else, we are a very powerful community when properly energised and harnessed. 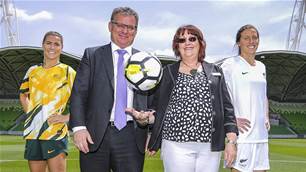 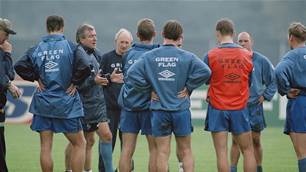