After commanding the Socceroos backline in 2014, 28-year-old Spiranovic has been clubless for four months his release from Chinese second division club Hangzhou Greentown.

It was his determination to play in the low-level league from 2015 onwards that drew the ire of otherwise-staunch supporter Postecoglou and signalled the end of his Socceroos career.

Is there still hope for Adam Taggart? Had a sudden precocious scoring-streak happened a few months earlier than the culmination of a poor season for Perth Glory, perhaps the 24-year-old would be on the plane to Russia.

Whether that says more about Taggart’s quality, or the dearth of striking talent in the Socceroos, remains to be seen. An inability to break into Fulham following his 2014 World Cup breakthrough was dashing for Socceroos fans’ high hopes for Taggart, but there’s still hope for the young striker yet.

An unlucky loser and a stalwart of Postecoglou’s reign, despite winning the 2018 A-League Grand Final, a less than impressive regular season for Victory by Troisi’s high standards contributed to him missing, possibly his last, World Cup campaign,

An inability to break into Juventus, before the poorly timed decision to take the plunge in Saudi Arabia and China also had their effect.

Nevertheless, Troisi has been a strong performer for the Socceroos since 2014, starring in the 2015 Asian Cup and 2017 Confederations Cup. You’d be mad to write him off yet. 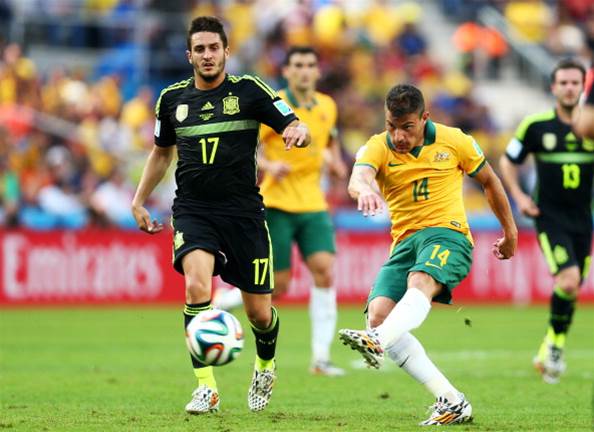 If Troisi’s exclusion was unlucky, Wright’s was a hammer blow not just for the defender, but for hopeful Socceroos fans. In short, Wright couldn’t have done much more than captain Bristol City to an impressive promotion push in the English Championship.

Only 21 in 2014, Wright burgeoned after his selection in the 2014 World Cup squad, despite not playing a match. Unfortunately the 25-year-old now misses out on the crucial next step, partially the fault of a somewhat undecided position. Will he play for the Socceroos at fullback or centrally?

It’s something Graham Arnold’s going to have to work out sooner, rather than later.

Unfortunate knee problems prematurely ended Vidosic’s influential spell at Swiss club Sion, but his decision to swap Europe for Asia – as it’s been for so many Aussies on this list – was the hammer blow to his national team hopes.

After sitting on the bench for each 2014 World Cup match, Vidosic was never called into another squad again. Lean spells in China and South Korea stole his peak years, and although he’s worked his way into form at Melbourne City,  at 31-years-old it could be too little, too late.

In hindsight, the Russian Premier League was too harsh a switch-up for Franjic following his breakthrough Socceroos role at the 2014 World Cup. Thigh problems played a small role, but there’s nothing like a freezing, snow-drenched experience in Moscow and a few weeks of unpaid wages to make you miss sunny afternoons in Queensland.

Injuries at Melbourne City then curtailed his A-League revival, before his inability to break into Daegu FC in South Korea nailed the coffin for Franjic’s 2018 World Cup hopes.

While it’s too harsh to judge the inability of Alex Wilkinson and Matt McKay to make the 2018 World Cup due to their age, the list of younger and youngish players that couldn’t make the list is long enough.

It’s always expected that the majority of youth products won’t go on to sterling international careers – just look at the makeup of any Australian youth national side.

However, taking into Russia just three out of a possible 14 players that were under the age of 26 in 2014 doesn’t make for happy reading.

Here’s hoping Graham Arnold has a lot more experience at his disposal in Qatar – assuming Australia makes it.

They’re going to need to be able to handle the heat…literally.