Two factors for me summed up the Roar’s performance last night – lack of confidence and lack of culture.

Let’s start with confidence. The Roar very much dominated the possession stats, but did nothing with the ball.

What really did my head in was the number of times forwards made runs wide and the man with the ball turned back inside. Back into traffic.

Why was the ball down the line never played? Because the runner was being tracked? Of course the runner will be chased but there was space out wide with a chance to get in behind.

These are the sorts of balls played all the time by Diego Costa, and I note both Western United goals came from players getting behind the defence.

Some players will not pass to a man being marked or tracked. God knows why. If you find the forward player’s feet and continue your run you’re a fair chance of getting in behind yourself with a return ball. And the defender closing down is taken out of play.

Is it timidity that stops this ball being played? Lack of confidence in either the passer’s own ability to play the ball to feet, or the receiver’s ability to control the ball when being closed down? Is it just plain laziness? Lack of imagination?

Coaches should be encouraging players to reward the runs by playing the pass, not least as players will stop making the runs if they aren’t confident they’ll at least sometimes get the ball.

Instead, the Brisbane players kept trying to go through the middle, or dink in crosses when the Western defence was set. In both cases they were outnumbered, out-muscled and simply outplayed as they attempted the same congested paths to goal all night.

Which brings me to my second point – culture.

It’s a tricky thing culture, in a professional club. It’s the coach’s responsibility to put his team together and communicate a team ethos which adds up to something more than the combined ability of the players. It’s a fighting spirit that takes the team to a higher level – able to beat or hold out against more skilled opposition.

There was one moment late in the game on Friday night – Jai Ingham zigged when he might have zagged. The ball was played outside his run, and he just stopped in (apparent) disgust. Thing is, if he’d bothered chasing, he could have got there.

I’m not saying this happened to Ingham but team-mates can make each other look good or bad – which might suit particular strategies like wanting to be picked ahead of another player, or fighting for one place on a roster.

That never happens to a team with decent culture – where the common spirit is strong enough to de-emphasise the individual needs. And culture starts with the coach.

It is pretty clear that Mark Rudan is building a formidable culture at Western United, but the same cannot be said for Robbie Fowler who bolted away from the pitch within seconds of the whistle – which again sends a message to his team and to the fans. You’ve got to be a sport – irrespective of the result.

A coach who doesn’t look like a good sport, irrespective of his good intentions and wishes, looks petulant and sulky and those qualities will never build a decent team culture.

No culture, no team.

Robbie Fowler has made a massive contribution to football and I wish him very well as a coach. I suspect however that there are some very difficult adjustments for him in coming to Australia – to a salary capped league – which has different constraints and psychological conditions to the professional culture in which he developed.

Just assuming he does really have ability as a coach, it’s going to take him a while get his head around the league dynamics. He’ll need at least a season to do that so he needs to buy himself some time by getting the team and the fans onside.

And that starts by setting a good cultural example. 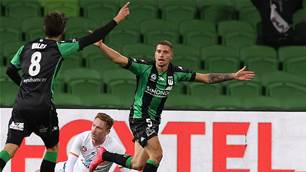