So Adelaide will host Melbourne City in the FFA Cup Final this year. I will, as usual, watch avidly, but for a Mariners fan it could (and should) have been so much better.

When Andy Pengelly scored in the third minute, I thought: “Oh dear…that’s not going to make City very pleased. Shouldn’t have scored so early.”

The goal was very well taken though – struck early from slightly behind the defender. Bouzanis would have seen it very late. But my fears for Brisbane were well founded, as it turned out, with a slick and ruthless performance from City that blew the Strikers off Perry Park.

Mind you, it was a high quality game first half – Strikers showed exactly why they had made it to the semi finals with some excellent passing and movement, and a second goal was not entirely out of the question.

But from the time Jamie MacLaren won the ball on the edge of the third, ran at the defence and played Metcalfe in for his maiden goal, there was only going to be one result. City came out second half to turn the screws and simply choked the life out of Brisbane with effortless possession and wave after wave of attack. They will aim to treat A-League sides the same way and will be one of the stronger teams this year if they can perfect that kind of performance.

MacLaren was my man of the match. He and No-one are combining well but for all his touted ability to take on players I thought Ramy Najjarine was surprisingly diffident against NPL opposition. Bon Scott in goal did well for Brisbane and Pengelly would not look out of place at an A-League club.

I’ll probably be accused of letting my navy and yellow lenses colour my view of this game but it was so frustrating for a Mariners fan.

We have played pretty dreadful football for a long time now so it was with mounting excitement that I perceived that the Mariners were gaining the upper hand last night. We were the better team for most of the first half and really should have scored when Sam Silvera had a free header six meters out.

He’s a good player, Silvera, and combined very well with Danny De Silva and Tommy Oar to make chances, while more experienced players shot themselves in the foot. The captain should never be carded for pushing other players over, and to do it in the dying seconds of the first half when the Mariners had a golden chance to score tells you something about Matt Simon’s quiet calm under pressure.

Moments earlier, Mark Birighitti had tried to get himself sent off with a swinging elbow after being barged by Blackwood. Yes, it was foul on Birra, which was given – but if that elbow had connected the Mariners would have been facing a penalty with 10 men on the pitch and Birra facing a lengthy ban. Leave it to the captain to arrange for 10 men, Birra...

But you could see why Simon was getting frustrated. In the second half, he was shoved over from behind while going for a loose ball – absolute clear cut penalty but waved away by Shaun Evans.

Then Silvera was taken out by an appalling elbow-first leap into the back by Jordan Elsey – not even a free kick! There was also George Blackwood’s very cynical foul on Silvera just as he was running into space – why no card for that?

At this time the Mariners were completely on top. Milan Duric was immense – pulling the strings in midfield and the creative players were making chances. They should have taken the lead when Jordan Murray was through one-on-one but his tame effort was well saved by debut keeper Isaac Richards. Then they did take the lead after Jack Clisby’s curling effort was missed by the keeper.

At this point, you could sense the Mariners’ nervousness and inexperience protecting a lead (against a good team). They surrendered a lot of possession and territory, rather than go for the second goal. I also had a bad feeling about Simon and said to my wife: “If I was Staj, I’d be getting him off in the next couple of minutes. Bring on another defensive midfielder and prevent Simon from getting himself sent off.”

And that was the game. Less than two minutes later, Matt Simon contests a header with Elsey and gets a second yellow. It was not an aggressive elbow that he used in an effort to climb, but it clocked Elsey and referees have been known to give yellows for such.

Thing was, it was nowhere near as bad as Elsey’s own elbow led jump into Silvera and given the stakes involved – a decent professional ref should have been happy with a free kick and a warning. That decision completely changed the match, and while it was Simon’s own fault for his stupid yellow in the first half, Mariners fans were fuming having copped – once again – the wrong end of some really crucial decisions from Shaun Evans.

It didn’t take long for Adelaide to wrap it up after that. The introduction of Nikola Mileusnic and the flagging of Duric’s resolve led to the final key moments and Adelaide were through.

So while the Mariners fans went home kicking stones at the performance of the referee, the pig-headedness of their captain and the fact that Stajcic did not turn to his bench – especially when Duric was struggling late – it was still a very good performance (if a little naïve) and we should have woken up this morning celebrating a Cup Final appearance. 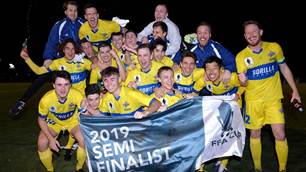 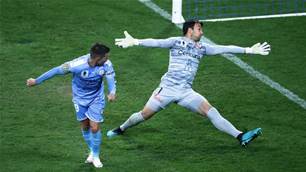 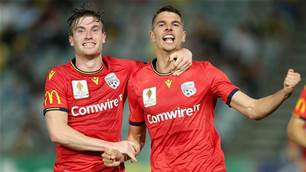