I am 60 years old and I still play football.

I can’t bear the thought of giving it away – it will seem like a kind of pre-death when I’m no longer doing what I most love in the world, pulling on the boots and playing the jogo bonito. But there are other aspects to the game – watching for example – which I will do till the end of my days.

While we wait for the next A-League season in December, here are a few ruminations on the game we all love.

And yet it takes years to learn this simplicity. I started playing at 6 years old but would’ve been late twenties (at least) before I could articulate this kind of thinking about the game.

Before then it was all about the experience – the work, the pain, the sweat, the hot triumph…the withering defeat.

When I think about football as a kid, I remember some of the goals I scored, but I also remember the breakthroughs I made as a player – the times I realised I’d gone to a new level. (There weren’t enough of them.) My breakthroughs as a player were all physical – mastering a new skill, getting faster, trickier.

I was pretty good, but if I’d been really good, I would’ve understood the simplicity much earlier. I didn’t, so lower division State League was the highest level I played.

That doesn’t mean I didn’t have some wonderful experiences. I played years of football at State League and Premier League level – which was competitive enough – but my most cherished years were with my mates in the Sewer Pigs and Gummysharks, at a somewhat lower level. (I now play 45Ds)

I would say though, that my most memorable football experience came after my ankle was destroyed in 2010, in the opening minutes of a Grand Final.

I ran down the left and hit a cross.

I’d had time to take at least two more steps because my left foot was planted in the ground when the (VERY) late studs up tackle hit me just above the ankle.

The pain was indescribable. Before I hit the ground I knew my leg was broken – and yet it wasn’t. Looking back, I could almost wish that it was, because that would have been a faster and simpler recovery.

I tried to play in 2011 but I just couldn’t do it. I couldn’t exercise, put on weight, lost my fitness and got an early insight into old age – so depressing.

Fortunately, I had the opportunity to get my ankle fixed by the amazing Kim Slater, and shortly after took the field in a very competitive O45As game against a team who hadn’t been beaten in years.

We lost 2 – 0 but it was a really hard, high quality game, in which I played my part. I was almost in tears of joy as I walked off the field – exhausted and beaten – I didn’t think I would ever have that feeling again.

In 1972, for the first time, my mother let me get up and watch the FA Cup Final at midnight. I had to pick the red team or the white time, and thank god I picked red.

Arsenal lost, but can you imagine following Leeds ever since? I shudder.

I followed Sydney Olympic in the old NSL and then the Mariners. I just love the match day experience – even if I really miss the Lawrie and Arnie days when we used to be a force (and well supported). The night we beat Newcastle in front of 19,000 was very special.

As an Arsenal supporter, one of my greatest ever days was when my wife and I bought tickets from a scalper (160 pounds each for tickets with a 32 pound face value). There’d been a bit of a fuss in the London news about detectives clamping down on scalpers (and purchasers) so I half expected to be arrested as I handed over the money.

My confidence was not enhanced by the scalper running away as he took my money. I half expected the tickets to be duds, but was amazed and delighted when we got in. We were just about the first inside so I then spent the next hour ringing all my mates in Sydney (at three in the morning) and saying: ‘Guess where I am!’

My most cherished day, as a supporter, though – is 16 November 2005. I’ve written about that before, but no sporting experience will ever come close to that. Thirty-two years of failure expunged in a white-hot night of passion too intense to ever adequately describe. Going to Germany was the icing on the cake – especially beating Japan in Kaiserslautern.

But that’s the top of the game. To this day, I will stop and watch any game. Under sixes – guys or girls having a kick about in the park…

All football codes claim to be the only one true code, but only football knows – deep within its marrow – that it truly is the World Game, most beloved of fans in every country with just the small exceptions of Australia, America, Canada and New Zealand. Everywhere else, football is number one and daylight second.

More often than not there are more members of FIFA than the United freaking Nations! Read it and weep, other codes, but that doesn’t mean I wish them to disappear. I love rugby league, enjoy union (when it’s not just ruck/lineout/scrum) and tolerate AFL, despite their deep antipathy to our game.

Across the world, all other codes are effectively irrelevant, which makes it interesting for we True Believers living in Australia. It’s like being a Democrat voter, living in Alabama – you’re no chance of ever winning but you know you’re one of the good guys.

As we move into the future with the world (hopefully) coming out of COVID and the A-League heading for a massive reboot, what can we expect?

I think it will be a while before football occupies its rightful place at the top of the sporting agenda in Australia. We seriously need to rethink everything and find our proper level – including promotion and relegation – unifying all levels of the game, before we can truly engage the masses…the people involved at grass roots…and turn Australian football into the behemoth it is certainly capable of becoming.

Oh, and in case you were wondering, my favourite F-Word is Friday. 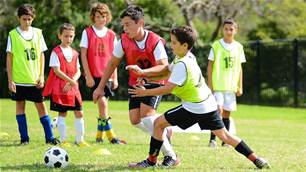