Okay, Kuwait seemed about as interested in the game as their crowd, but you can only play what’s in front of you. Playing in stifling heat on an over-grassed pitch, the Arnie Era got off to a very solid start.

I’ve already written at length about what I expect from Arnie’s National Team – a tight defensive unit getting bodies between the ball and the goal, which explodes with one or two touches and pace in possession. We definitely saw that the other night but there were layers of subtlety also that showed somewhat of Arnie’s strategic astuteness.

For example, Arnie’s Mariners or Sydney FC teams would press as a tight unit all over the park. This forces teams to go long in an effort to bypass the press, but plays straight into the hands of excellent defenders (like Alex Wilkinson or Trent Sainsbury) who are strong in the air and are waiting for exactly that tactic.

Such a tight press, however, requires supreme levels of fitness which Arnie can’t quite control while the players are mainly at their clubs. Yes, he does monitor fitness via Andrew Clark’s office, but it’s not the same as having a club team doing all the fitness work together over a full season.

Therefore, on a hot night in Kuwait City, Arnie went for the occasional high press but was mainly content to keep the compact unit for the defensive half of the pitch. This is the way to play in Asia – as so many of us lamented during the Ange Era. (Don’t get me wrong – I had huge regard for Ange and what he tried to do, but in the absence of lethal strikers we were always vulnerable in Asian conditions playing his three at the back, constant press game.)

I suspect that in Australian conditions we will see a lot more of the press up the park. We will also see it in major tournaments when Arnie has the team together for longer to build team fitness (as opposed to just individual fitness). Mind you, the next two (potentially three if we make the Confederations Cup again) major tournaments are in the Middle East, so perhaps what we saw the other night is what we can expect anywhere other than a cold night in Sydney or Melbourne.

Arnie has kept one aspect of the Ange playbook – maximising bodies into the area to create goal scoring opportunities. (And that also is another reason to minimise the upfield press – to maintain energy for when we have the ball and choose to attack in numbers.) 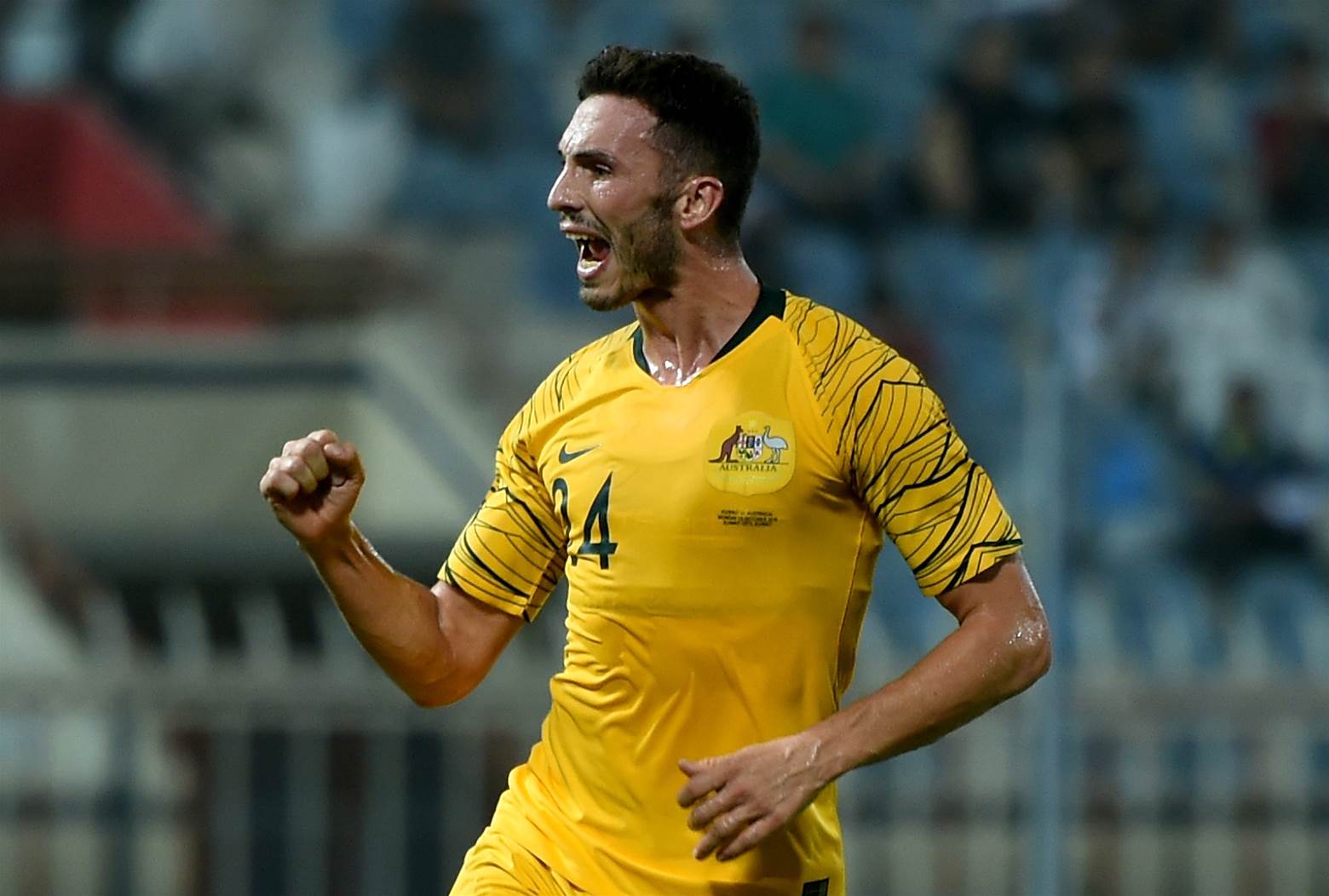 The advantage I think he will have over Ange in this area is that there are more players coming into the team who are comfortable on the ball. Mile Jedinak was not (for all his other qualities) and the likes of Josh Risdon, Robbie Kruse, Mathew Leckie and Tomi Juric do not easily hold possession. Sainsbury is capable of the odd sloppy pass but is otherwise comfortable on the ball and will even carry it forward.

In contrast, we have Aaron Mooy and Tom Rogic whose comfort with the ball has been forged at the highest intensity. Massimo Luongo and Jackson Irvine are also pretty comfortable on the ball and both are capable of killer passes. The really exciting development moving forward though is the emergence of players with the technical ability to hang onto the ball and do something truly creative.

Daniel Arzani, Awer Mabil and Alex Gersbach are all completely at home on the ball, want it all the time, and will always beat the first player. The last 20 minutes of the game on Tuesday morning was an absolute delight watching these players carve open the hapless Kuwaitis and you know these are going to be the stars of the future.

I really like Thomas Deng also and have been saying for a couple of years we should be looking at him in the National Team. If you also throw in the likes of Riley McGree, Joey Champness and too many others to mention here the future is looking promising.

We’re still missing a couple of excellent strikers though. Apostolos Giannou did well enough the other night and Juric also had one of his better games but neither fill me with confidence for the tough games ahead against much better teams. I think our better options going forward are Andrew Nabbout and Jamie Maclaren, with maybe Adam Taggart if he gets going at Brisbane. Champness could also emerge as a genuine attacker this season.

In the short term, we still might see Rogic as a false nine with Mooy or Irvine at 10. There is also the Martin Boyle question, but one thing is certain. Arnie will have plenty of options in attack.

Get the system right and the goals (hopefully) will take care of themselves. Arnie (the most successful coach in A-League history) has already shown us he’s a master of systems.