I don't yet (quite) believe that the Socceroos are on target for qualification.

Looking at the last two Socceroos matches, somehow we got the points but they were not performances for The Ages. You’d even have to say we got a little bit lucky – not least as the VAR’s advice on a possible penalty (versus Vietnam) was rightly ignored – but we’ve seen those given.

This wasn’t easy for the Socceroos. Sauna like conditions on a swampy surface was never going to let us play with the kind of zip we had against China. Trying to play football on that pitch was like trying to dance Swan Lake on a rubbish tip - in a lumber jacket.

So we shouldn’t have tried. If I was the coach I’d have sent out Taggart and Duke together and bombarded the box with early balls to press our height advantage. It may be crude but I bet it would have worked better than what we served up.

To be fair, the Socceroos might have thought they were in London given the big red bus parked obstinately in front of the Vietnam goal, but we did nothing to try and move it. We diddled about trying to move the ball quickly, and all that did was give the ball away constantly.

Yes, we did win it back constantly, but not without a number of scares. They had chances over the course of the game and while I’m adamant the penalty decision was correct (back to the ball, arm tucked in and it hit his stomach first) I more than half expected it to be given.

What most annoyed me was that every time we did get our fullbacks into dangerous positions, they never once whipped the ball across. Every single time Grant and Smith (or Mabil and McGree) received the ball in space, they’d check back instead of taking the yards on offer or – better still – whipping a ball in behind for Taggart to chase.

It was noticeable that the only goal came from the only first time cross we hit all night. Ajden Hrustic’s instinctive curling ball snuck in behind for Grant to nod home for his first goal in the Green and Gold. And how valuable that goal may prove to be.

The other thing that had me shouting at my telly was the absence of Daniel Arzani. We desperately needed someone prepared to run at the defence and, while Tom Rogic gave them a few frights, he couldn’t do it all on his own. I fully expected to see Arzani get at least 30 minutes and he would’ve horrified the Vietnamese with his speed and aggressive running. If there is one bloke in our team who could’ve danced Swan Lake that night it was him.

But Arnie stuck doggedly to his system and got lucky. It’s a system that will work on good pitches in cool conditions, but playing in the sauna-swamp requires some hard-nosed practicality.

Fortunately we won’t have do it again this round.

As Arnie said: “It’s the sign of a good team to win when you’re not playing well.”

It’s also the sign of a good coach to adapt to the conditions and make the kind of changes necessary to give his team the best possible chance.

Asia is the most diverse of continents with the broadest range of playing conditions. Why on Earth should we approach that with just one game plan?

I think we played much better against Oman - especially in the second half - but it could easily have gone pear-shaped.

I'm not entirely convinced by Harry Souttar. He does get a lot right but looks a little dodgy against zippy attackers. I think he got caught ball-watching for the Omani goal and was then too slow to close down the shot.

Even worse, we've stopped making use of his height at the other end. I can't remember Harry getting his head to a ball in the opposition box in the last two games. He always goes to the back post so I wonder if that makes him a little predictable and easier to marshall? Maybe he should be trying some near post runs? He'd be devastating flicking a ball on, and probably easier to hit.

My biggest concern, especially in the first half, was the number of times we lost possession through sloppy passes. Grant, Irvine and Mabil played some truly useless balls that could easily have hurt us. A better team would definitely have made us pay for such profligacy. Grant in fact looked injured the number of teams he was beaten on the outside. That never happens usually.

On the plus side, Boyle continues to impress. Mabil was dangerous (despite a few bad decisions in possession), Mat Ryan was excellent, and Trent Sainsbury was a pillar of defence. Karacic looked good when he came on - one assist and should've had more.

The best player though, in both games, was Ajden Hrustic. He has become a really important player for the Socceroos and I would not be surprised if he is shortly courted by some very big clubs. I just loved the way he would beat the first defender then play a cross-field ball right onto the foot of a team mate.

A big shout-out needs to go to Arnie also - he got his subs exactly right.

So, after three rounds we're equal top with six points between us and third. There are still seven matches to play and the next two are against our main rivals. Japan will be desperate on Tuesday and are far too good to be where they are on the table. Any points at all will be invaluable. (I'd like to see some draws in other games also.)

If we remain unbeaten after the Saudi match, I'll start to believe that we really might be going to Qatar in 2022. 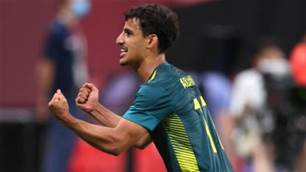