The Socceroos have (hopefully) two matches in the Last Chance Saloon, in June. It’s time for Arnie to throw off the overly cautious approach and try something radical.

Okay, so my last two articles on this subject called for Arnie’s sacking from his Socceroos post. He may not be perfect, but he’s the best insect overlord we have… for now…

Putting myself in his shoes (and why not), looking ahead to the June play-offs, the following are my ruminations on how best to salvage something from our train-wreck of a campaign. It’s probably not quite the right time for wholesale changes, but I’d still give the team one hell of a tweak…

I want us to play with verve and confidence. I want us to walk out expecting to win, play with a bit of swagger and intimidate the enemy just through our confident bearing. There’s been a whiff of apology about our last few matches and that’s got to go. I only want arrogant bastards (in the very best sense of the words) in our team – which means having the ability to match the hubris. There’s nothing worse than arrogance blended with incompetence.

I also want to see intelligence, both individual and collective. The ultimate team are eleven brains all plugged into one football consciousness. They all know what each other are going to do in every moment of the match, so move in accordance with that knowledge. Can you imagine how powerful that would be? I reckon a team of 50 year olds could beat a team of 20 year olds if they were all plugged into one brain and the 20 year olds were not, but to be fair, it would take several PhDs and a huge research grant to test that theory.

In the meantime, let’s just have a clear idea of how the team wants to play PLUS every individual knowing exactly what their role is within that structure and system. That would help us a lot. It’s crunch time so there is no room for shrinking violets. We need pace, strength, touch, vision, courage and coachability.

In my view, there are some players of recent camps who lack too many of these qualities (despite being able to play well enough with their club sides). Time to unleash the beasts…

Mat Ryan is the incumbent and has done pretty well for the Socceroos. Thing is, he does have the occasional howler in him and I worry about how regularly he is playing for his club – not least as playing (well) in goals is so much about timing and confidence. The goalkeeper you want saves all the easy ones, most of the hard ones, and some of the impossible ones. Mat Ryan (Holland 2014; Japan and Saudi this campaign) has let in some easy ones, but saved lots of hard ones. He doesn’t entirely fill me with confidence, and I deeply regret the retirement of Mitch Langerak, who I regard as the most talented Oz keeper of the last ten years.

Recent back-ups have been Danny Vukovic, Andrew Redmayne and Lawrence Thomas, but none of these are likely to get the nod ahead of Ryan. Arnie needs to put some real pressure on Maty by selecting some of the new breed, like Mark Birighitti, Daniel Margush or Thomas Glover. (Why do the best keepers tend to be ex Mariners?)

It is definitely over for Rhyan Grant, and Fran Karacic has not quite set the world on fire. For some time, I’ve called for Nat Atkinson to be picked at right back. He’s finally made his starting debut and I expect him to be a long term Socceroo. This is a player with pace, intelligence, and no little physicality. He reminds me a little of Kevin Muscat, and before you start screaming, Muscat was a bloody good player. Every team needs a couple of Muscats. (Understudies – Thomas Deng; Lewis Miller) 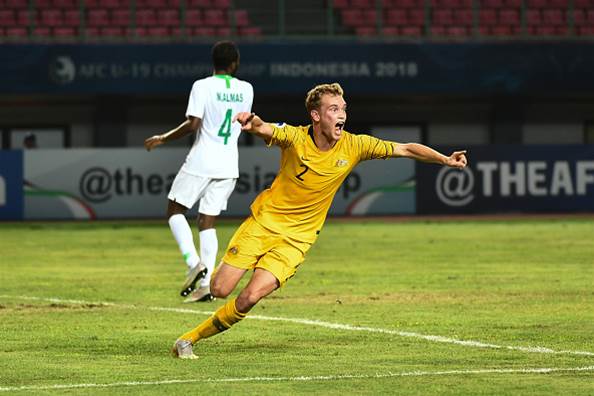 Centre backs are a little easier. Trent Sainsbury is a brilliant defender (although he could improve his passing) so must be the primus inter pares. Candidates to be his partner are Milos Degenek; Curtis Good; Kye Rowles; Bailey Wright. (Harry Souttar is still injured.)

No doubt there are others I don’t see often (surely Arnie will be picking up the slack here), but of those I have seen – Milos is an excellent player, but a bit nice. Curtis and Kye are outstanding at A-League level but untested higher up. They need to be in the mix but the gig probably goes to Milos… Bailey Wright would be breathing down his neck.

Kye Rowles (the new Wilko) will be a long term Socceroo so does Arnie pick him now, or wait until next campaign?

Joel King has done a fairly good job at left back. Most other candidates are too old, for the future, but I’d like someone with a bit more gnarly quality in the Atkinson style. It’s surely over for Aziz Behich (who has had a good Socceroos career), Brad Smith and Jason Davidson, although the latter has had a good year for Victory. If Davidson could combine his current attitude/ability with his former youthful energy, he’d be an amazing player. I suspect it’s a bit late. Callum Elder must be in contention. Could Ryan Strain play on the left? Could Lewis Miller or Thomas Deng play on the left?