Well, we started with a win – and in the end, a fairly dominant win. But I’m not joining the clappers just yet.

There was a lot to like about our performance but a bit for concern also. The number of bad touches and poor passes when the game was still scoreless might have been punished against a better side.

Fortunately, we have Ajden Hrustic and Tom Rogic in our team. Their calmness on the ball and ability to find team mates made the difference in the first half – gradually bringing the likes of Martin Boyle and Awer Mabil into the game.

Hrustic, in particular, is becoming a really important player for the Socceroos. In the first half he played an Aaron Mooy type role – dropping deep for the ball and starting attacks. In the second half he was further up the pitch and constantly causing problems. He’s pure quality and at 25 will be a fixture over the next few years. If he did have a black mark it was his inability to find Sottar’s head at dead balls.

Rogic was typical Rogic – came in and out of the game – but when he did get involved played some glorious balls and figured prominently in the lead up to two of the goals.

Trent Sainsbury personally encapsulated my concerns. He played a couple of dreadful passes early, which could have led to disaster, but we weathered that storm. Sainsbury then proceeded to have an excellent game – hitting some superb long balls as well as playing the dangerous Elkeson completely out of the game.

Second half it was Martin Boyle who really came into it – stretching and testing the Chinese defence until he was cynically brought down in full flight and immediately replaced (clutching his hamstring). Two minutes later we were three up and coasting.

Aaron Mooy took over from Hrustic as ringleader with 20 to go. He is such a strong player and will hopefully start against Vietnam. I wouldn’t be surprised if Rogic is rested for that match as he played 85 minutes against China and will find the conditions in Hanoi very taxing.

I was happy to see Callum Elder get his first cap, and the eleven that finished the game had a fairly exotic look with James Jeggo and Riley McGree coming on late. Mitch Duke is also having somewhat of an Indian Summer to his Socceroos career – scoring with just about his first touch to wrap up the points.

In the final analysis, you could say the Chinese were poor, but was that because we wouldn’t let them play? Or were they just poor? If we can stop Vietnam in similar fashion I’ll be a little more convinced.

So, we’re top of the group for now but there are some harder games ahead. Vietnam at home on a hot, boggy pitch will be no pushover, and after that it’s Japan in Japan. Japan lost last night to Oman, at home, so they’ll be desperate for points.

But no-one in this group is easy. Even China will be a much tougher prospect when we have to play them again.

If we actually get to play some games in Australia I’ll be so much happier. 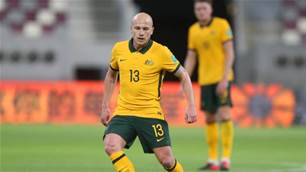