I was first introduced to Subbuteo only a few months ago when an English friend of mine showed me the game and it was at that very moment, I was hooked and I wanted more. But what is Subbuteo?

Playing Subbuteo is a physical simulation of association football, involving dexterity and skill in flicking the playing figures, which stand on weighted bases, across the tabletop pitch towards the ball.

What makes the game different from most other tabletop sports games are the hundreds of team kits and accessories. While most games feature only two teams (usually "red vs blue" or "white vs black"), Subbuteo has several hundred team designs, almost all representing real teams, with the notable exception of comic book legends Melchester Rovers.

While there were many famous teams such as Chelsea, Manchester City, and Real Madrid, these were complemented by many unique sides, such as Boston Minutemen, Landskrona, Antwerp, Hartford Bicentennials, Admira Wacker, and even unpainted models.

There are also many additional accessories, such as new balls and goals, special figures for free kicks and throw-ins, stands and crowd, linesmen, ball-boys, streakers and policemen, floodlights, TV cameras and even a mini-Her Majesty the Queen to present the FA Cup. 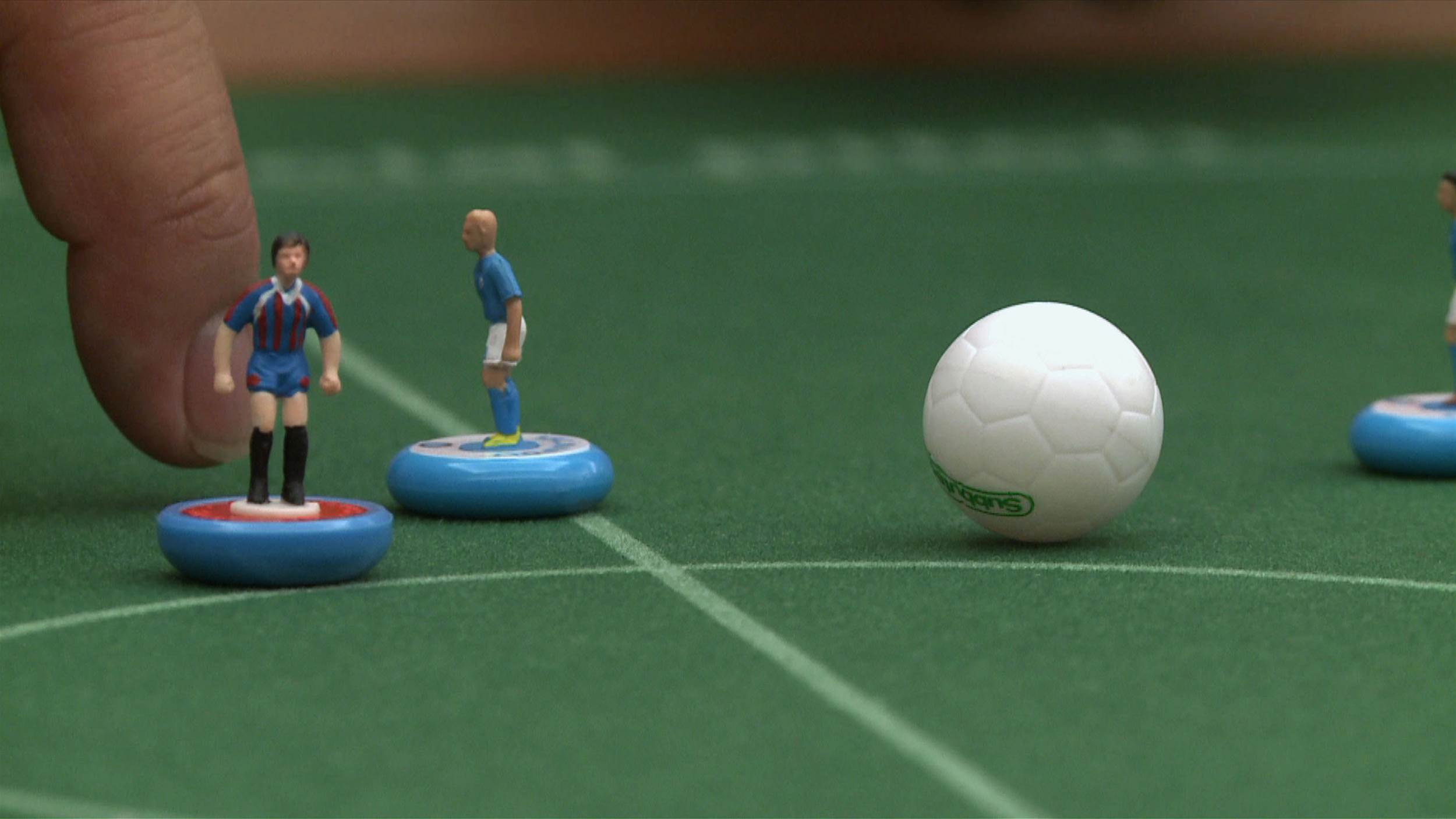 Subbuteo has more than one competitive circuit, one of which is known by the term sports table football governed by FISTF. In 1992 there was even an attempt to have Subbuteo made an Olympic sport.

The rules of Subbuteo table football attempts to correspond as closely as possible with association football. However, the necessary simplifications involved in some ways complicate things further.

Players maintain possession as long as the figure they flick makes contact with the ball and the ball does not subsequently hit an opposing figure, although the same figure cannot be used for more than three consecutive flicks.

Shots at goal can be taken only once the ball is over the 'shooting line', a line parallel to and equidistant between the goal line and half-way line. The goalkeeper figures are attached to and maneuvered with, a rod that fits underneath the back of the goal.

The offside law is in effect, but only pertaining to figures that are forward of the opposing team's shooting line (as opposed to the half-way line, as in actual football).

In Australia there are currently thirteen clubs that represent different towns, cities and regions around Australia. Those clubs include:

You can find more information by searching the clubs on Facebook or heading over to Subbuteoaustralia.com

In exciting news within Australian Subbuteo, the biggest Subbuteo tournament in Australia’s history is taking place in Sydney next February between the 3rd and 5th.

On the world scale of Subbuteo there a big things happening and growing rapidly, in Asian there are now five federations, Russia, Hungary, Romania, Chile, Mexico and the United States of America are all growing at a rapid pace with Australia following suit.

The South American Championships have just finished with four federations with two others joining next year.

Australia is currently exploding with Subbuteo madness from one club to over ten within a very short period of time.

I myself have formed my own Subbuteo club on the South Coast of New South Wales, Real Eurobodalla Subbuteo Club.

The thing I’ve loved the most since taking a keen interest within Subbuteo is how welcome and warm the Subbuteo community is here within Australia, people wanting to help each other and not worrying about whose in what club (perhaps that will change when a completion is on?)

If you’re a football fan I ask you to find your local club or start your own and the Australian Subbuteo community will welcome you with open arms, we want more players or more clubs. Everyone should be lucky enough to experience Subbuteo.

Preview: Matildas vs Republic of Ireland