Well that was more like it. A bit more urgency and some strong individual performances have put the Socceroos back in the Asian Cup race.

Arnie must have read my Oz v Jordan article – he picked exactly the team I suggested for Palestine, so kudos Arnie!

Seriously, it was pretty obvious what was needed – some faster ball movement and better delivery into the final third and that’s exactly what we got. Tom Rogic had a much better game but it was two of the replacements that really caught my eye.

Chris Ikonimidis was just brilliant and poor old Robbie Kruse’s face must have got longer and longer on the bench as he watched his rival for the left wing spot excel with pace, purpose and pin-point crossing. His ball for Awer Mabil’s goal was a peach and there were plenty of others.

I hate to seem like I’m piling on with all the other keyboard warriors but the end must be near for Kruse. His bad touch, poor crossing and constant offsides were just a bad memory as we were treated to Ikonimidis’ superb display of vision, precision and excellent sleight of foot.

To think Daniel Arzani will soon be challenging again for one of the front four roles (with Andrew Nabbout, Matt Leckie and Martin Boyle) – time for Robbie to plan his retirement party.

Rhyan Grant also was excellent. To be fair he was not required to do a lot defensively but he was very aggressive going forward. I loved his first time balls down the line which he played several times and were a refreshing change from the checking back we saw too often in the Jordan game when Mabil in particular was offering a final third option.

I was pleased also for Jamie MacLaren. I’m not convinced he’s the answer up front – Nabbout (or even Ikonimidis) would be my first choice – but I’m very glad he got the monkey off his back with a well taken header. Thing is, he missed a sitter in the third minute and until he puts away chances like that 19 times out of 20, well, the critics will continue to raise an eyebrow at his selection.

In fact you have to wonder why Apo Giannou didn’t start this time. He always does well and took his chance again with only a handful of minutes to impress.

Jackson Irvine had an excellent game, which was somewhat stymied by the referee’s ludicrous calls against his wins in the air. Memo to AFC refs…you’re allowed to jump and your arms can’t be detached when you do! If you want to see a jumping foul have a look at what happened to Mass Luongo against Jordan! I’ve seen red cards for less!

So, as the tournament progresses, we will continue to encounter parked buses and that was the template for how to get around them (while always needing to be vigilant at the back).

As for that, the loss of Sainsbury is a bit of a worry for the Syria match. Not least for his passing range going forward. Arnie will need to decide between putting Milligan back with Degenek (who has been excellent so far) or playing Matt Jurman in Sainsbury’s spot.

I’d opt for the latter as Milligan has been brilliant in the old Jedinak role and you don’t want to weaken two positions to fix one.

So, normal service was restored with a comfortable win but we are not yet over the line. Syria will be desperate, and can knock us out of second place if we can’t continue the good work.

P.S. I hate that Asian Cup Champions badge on the chest - puts a target on our fronts as well as our backs. 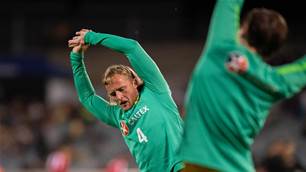