St. Petersburg Stadium hosted its seventh and final match of this summer's tournament on Saturday, as Belgium beat England 2-0 in the third place play-off.

Three of the seven St. Petersburg's matches were held in front of a sell-out crowd of 64,468 supporters.

The 2018 World Cup kicked off on 14 June and will come to a close on Sunday, with France facing Croatia in the final, which will be played at Moscow's Luzhniki Stadium. 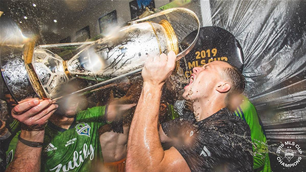