Belgium midfielder Kevin De Bruyne said his side and France both had a 50/50 chance to win the the World Cup semi-final encounter, but one corner kick proved to be decisive.

Belgium suffered a 1-0 defeat at the hands of France in St. Petersburg on Wednesday (AEST).

France move through to the World Cup final, where they will face the winner of the upcoming semi-final match between England and Croatia on Monday, while Belgium will face the loser of that match in the third place play-off on Sunday (AEST).

"Today the chances were 50/50. The match was very difficult for us, we took on a very well-organized team. Both us and France had only several scoring moments. One corner kick became decisive," De Bruyne said. 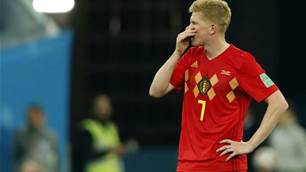 De Bruyne: 'One set piece and that's it'