Brazil's players, who arrived in Russia on Monday ahead of the 2018 FIFA World Cup, have immediately taken to their new surroundings in Sochi, goalkeeper Alisson Becker said Tuesday.

He praised the wonderful infrastructure of the city, the team's base camp and the opportunity to have breakfast and dinner with a sea view.

"We have not been here long, but the impressions have been the most positive ones. We have already been to the beach, the infrastructure is great, and it's fantastic that we can have breakfast and dinner with a sea view. The conditions at the stadium are the best, and, most importantly, we feel the support of our fans," Alisson said.

The Brazilian team are based in the Black Sea resort town of Sochi in the south of Russia and are training at the Yug-Sport Stadium, where they held an open training session for the public on Tuesday.

Brazil are the only country to have lifted the World Cup trophy five times and will play Switzerland, Costa Rica and Serbia in Group E at this summer's tournament, which is set to be held in Russia from June 14 to July 15. 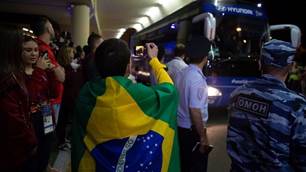 Brazil arrive in Russia ahead of World Cup