A football fan was fined 3,000 rubles (about $50) by a court in Moscow for illegally entering a VIP box during Sunday's FIFA World Cup final at Moscow’s Luzhniki Stadium.

“Sergei Zagorovsky, born in Moscow, illegally entered a section for guests of honor during the France-Croatia match, he was fined 3,000 rubles (about $50) without being prohibited to access venues hosting official events,” the press service said.

It was not specified how Zagorovsky managed to enter the high-security VIP zone.

Another fan was handed a similar fine after “entering accreditation zone ‘0’ of the Luzhniki Stadium without a ticket.”

Russia's first-ever FIFA World Cup kicked off on June 14 and ended with a spectacular final at the Luzhniki Stadium on Sunday with France beating Croatia 4-2 to lift the World Cup trophy for the second time. 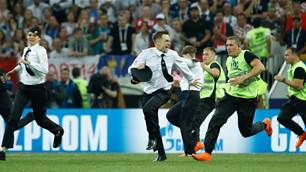