MOSCOW, July 12 (Sputnik) - France defender Samuel Umtiti said on Thursday that his team would not repeat the mistakes they had made in the UEFA Euro 2016 final against Portugal when they face Croatia in the FIFA World Cup final on Sunday.

France were beaten by Portugal 1-0 at their home tournament in 2016, with forward Eder scoring the only goal of the game in the 109th minute.

“I left this defeat by Portugal in the final behind… We know what we did wrong and what mistakes we should not repeat… We should play the same way we played in the previous matches. We’re on the right track,” Umtiti was quoted as saying by the national team's official website.

He added that Croatia had a lot of strong players and that France should take the game as seriously as they did with all their previous World Cup matches.

The last game of this year's tournament, which will see 1998 champions France face first-time finalists Croatia, will take place at Moscow's Luzhniki Stadium on Sunday. 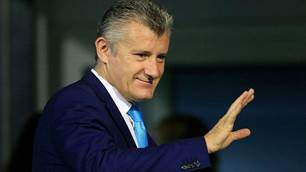 Croatian football boss: 'I want to jump into the Adriatic Sea'