Uruguay defender and captain Diego Godin said on Friday that no member of his team blamed goalkeeper Fernando Muslera for committing a mistake in their defeat by France in their quarter-final encounter at the 2018 World Cup.

The match that was held in Nizhny Novgorod ended in a 2-0 victory for France, with Uruguay goalkeeper Fernando Muslera committing a mistake with the second goal, as he allowed Antoine Griezmann’s speculative shot to slip through his fingers.

"I'm very proud of my team, of the way we were fighting at this World Cup. Of course, none of us blames Fernando [Muslera]. Everyone commits mistakes sometimes, and I'm sure that he'll overcome this as he is a strong person. Now I want to thank all our supporters who came to Russia and who were rooting at home," Godin told journalists. 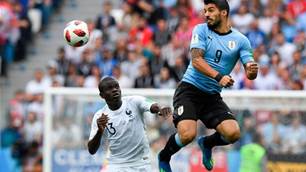 Forlan not planning to return for Uruguay