A graffiti mural depicting Lionel Messi will be painted in the Russian city of Kazan, where the Argentina play France on Sunday morning AEST.

Argentina are expected to stay at the same hotel that Portugal used during the 2017 FIFA Confederations Cup. A mural of Portugal captain Cristiano Ronaldo was painted outside of the hotel ahead of that tournament.

Local media reported earlier that Messi had asked for a graffiti depicting him to be painted next to the hotel. However, an employee of the city's mayor's office said that he had not heard of such a demand.

"We are indeed painting graffiti portraying Messi, but we planned to do it already last year, and Kazan mayor Ilsur Metshin mentioned that," he said.

In 2017, Metshin told journalists that there were plenty of locations in Kazan where portraits of prominent footballers, namely Messi, could be painted. 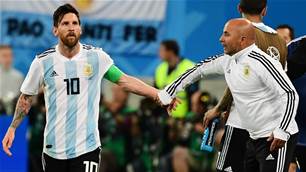