Buses, tramways and suburban trains transported around 400,000 people in the Russian city of Volgograd on the day it hosted the World Cup match between Tunisia and England, the city's Deputy Mayor Sergey Razumny said on Tuesday.

The game, which ended in a narrow 2-1 victory to England, was held at the Volgograd Arena on Monday and was attended by more than 41,000 supporters.

"On the day of the match between England and Tunisia, public transport carried more than 400,000 people, fans, guests and residents of the city, who visited the Fan Zone," Razumny said.

The 43,000-seater Volgograd Arena is set to host another three group-stage games. Nigeria will take on Iceland on Friday, Saudi Arabia will play Egypt on June 25 and Japan will face Poland on June 28.

The 2018 FIFA World Cup kicked off on June 14 and will continue until July 15, with the matches set to be played in 11 cities across Russia. 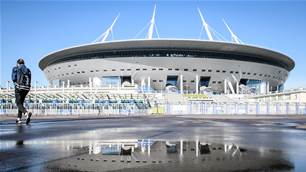 England draw in a record TV audience in the UK

England fan is taken to hospital after car accident