Portugal lost 2-1 to Uruguay in the World Cup round of 16 game at the Fisht Stadium on Sunday (AEST) and were eliminated from the tournament.

"Ronaldo still has a lot to give to football and I hope he will stay to help the young players grow and develop. We have a team with many young players and of course we all want him there with us,” Santos said.

Ronaldo, who is 33, played 154 games for the national team and scored 85 goals since making his international debut in 2003. 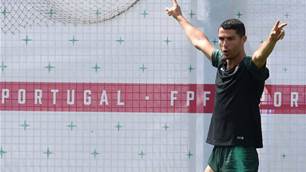