Portugal head coach Fernando Santos said on Thursday that his team's match against Spain will become a "classic" because the teams "know each other well" and want to win the FIFA World Cup in Russia.

“This is a classic game, we have a lot in common and geographically we are neighbors. Neighbors always know each other [well], this game will become a ‘world classic.’ We both have the same goal – to win. Spain has a great team and they are very experienced. We played each other before. We always pay attention to Spain and watch their weaknesses. We are ready physically and mentally,” Santos told journalists.

He added that Portugal has a "long history of losing to Spain," and this summer's tournament might become their opportunity to change it.

Portugal will face 2010 World Cup winners Spain at Sochi's 43,000-seater Fisht Stadium on Friday, before playing Morocco and Iran in their other two Group B matches.

Spain will be playing at the World Cup under a new coach, Fernando Hierro, after Julien Lopetegui was sacked on Wednesday. 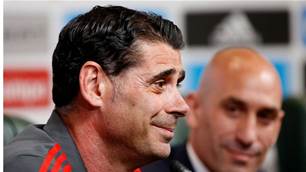