The club believes the Wanderers Centre of Football will be one of the biggest club sports facilities in the country.

Once complete, the 11-hectare development on the edge of Bungarribee Park will include nine pitches, two with grandstands, a new Academy facility and community offices complementing the current venue.

Wanderers Chairman and co-owner Paul Lederer today said the centre marks a line in the sand for the club as a statement of intent and longevity.

Combined with the new stadium and the centre, Lederer is convinced the memories of the last few years will be quickly wiped away.

"The last two seasons have been frustrating for everyone," he admitted at the HQ opening today. "I've said that publicly and I'm not going to hide it.

"But nevertheless we have passionate fans who are very enthusiastic about the club and I'm absolutely sure this year will be different."

The club has removed any fees for players at their academy to ensure money was not a stumbling block to unearthing local talent.

“We have planned, paid for and delivered a facility in Western Sydney that in my opinion is unrivalled," said Lederer.

"If you believe in the youth of today is the youth of tomorrow, you got to give some facilities to encourage them to come to this club. And we made it viable financially.

"And in every respect, there's no excuses. They can come try and add a world class facility, world class trainers, and and fulfil their dreams.

"I don't think there is a better club in Australia...of any code."

He addedL “My fellow owners and directors have had this development at the heart of our long-term plans since our investment in the club in 2014.

"We have the tools and support to make a significant impact in the Australian sporting landscape and with this development we have done just that.

“The last three years of hard work today comes to fruition. I am full of pride when I think of what we have achieved in such a short time."

"With our Centre of Football, our new stadium in Parramatta and the support of our members and fans there has never been a more exciting time to be a part of this club."

This is enough to make a player want to come out of retirement 😍😍🔴⚫️ https://t.co/WAy7N8Tq7X

The Wanderers Centre of Football will also be home to the majority of the club's community programs including male and female elite pathway development, female participation with a focus on body image; mental health; obesity and healthy eating, programs for Seniors and the elderly like Walking Football, as well as work with disabled, Indigenous and immigrant communities as well as hosting international youth tournaments.

“While Bankwest Stadium is the jewel in the crown of our football club, our Centre of Football will be the forge that moulds our future generations of male and female talent,” said Tsatsimas.

“The Wanderers Centre of Football is not just an elite facility but will be a community asset as we deliver a wider and more strategic community program in one of Western Sydney’s biggest growth areas and a heartland of football.”

WSW aim to be the Barcelona of the West 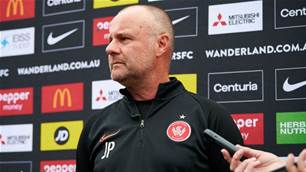 De Marigny fussed about 'vocabulary', not a contract