A-League clubs have hit back at FFA for not consulting them about expansion submissions, saying their plan "lacks all legitimacy and will not be accepted."

FFA announced the formal opening of submissions from potential A-League franchises on Thursday, with a shortlist to be created by the end of August and two new A-League clubs to be announced by October.

FFA said that the player's union, A-League clubs and state federations would have a chance to express their views on how league expansion should operate.

The APFCA, however, said that the announcement defied an agreement to wait until FIFA and AFC representatives decided how a "Congress Working Group" would be structured, to resolve the ongoing governance standoff.

"(This) process has been undertaken without any formal consultation of both the (clubs) and the PFA," Griffin said.

"Should you proceed to make the announcements that you seemingly intend to make soon, APFCA puts you on notice that it does not accept the legitimacy of the process, whatever that may have been, adopted by FFA Administration and the FFA Board to expand the A-League competition.

"Unless and until the corporate governance issues have been resolved any decision made by the FFA Board as to expansion lacks all legitimacy and will not be accepted by APFCA." 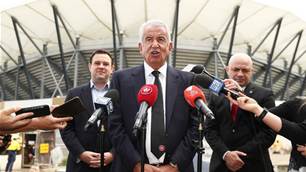