More than 100 A-League players are out of contract after May 31 but FFA CEO James Johnson says there could be room to extend deals to help complete the season.

Football Federation Australia chief executive James Johnson has flagged the potential for A-League player contracts to be extended if the competition resumes.

More than 100 players are out of contract after May 31 and if the A-League does resume, competition would almost certainly stretch beyond that date.

Johnson said FIFA guidelines allow the FFA to work with clubs and the players' union, Professional Footballers Australia (PFA), to find a solution.

"There are discussions that have happened at FIFA which have approved guidelines for player contracts to be extended and to run to the end of the respective season given the COVID situation. These guidelines cater for changes to transfer windows all over the world.

"They're not something we can enforce but they're certainly guidelines that we can use in discussions with the PFA and the clubs to try to find a pragmatic solution once we're a bit clearer on when the date we would resume the A-League is."

Johnson said the FFA will not follow the lead of other codes in determining a return to play.

"The NRL has chosen its path and we're going to choose our own, and that's another path," Johnson said.

"I think football, our code, is quite lucky in that we're local but we're also a very global sport and we do have a number of examples of other leagues all around the world that we can look at and learn from.

"So in addition to our local sports we're also in touch with global football leagues and we're trying to learn as much as we can. Ultimately we'll be taking a decision that we think is right for our sport."

Meanwhile, Perth Glory owner Tony Sage said the club had yet to receive its most recent broadcast rights payment, amid ongoing uncertainty over the future of the A-League's deal with Fox Sports.

"The FFA are in negotiations, (and) have been really for the past two or three weeks to find out exactly where we stand," Sage told Sportsday WA.

"We haven't received our distribution from the broadcast which we always get on the 15th of every month." 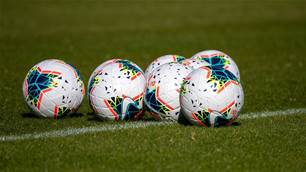