A-LEAGUE fans from each club star in the new issue of FourFourTwo magazine as they tell it like it is. And this special A-League season preview is out now.

A-League season nine is almost upon us and FourFourTwo Australia magazine primes you with its biggest ever season preview – all ten clubs profiled and analysed with star interviews, fans verdicts and loads more

What's in this special issue?

The A-League is back!

After the greatest season ever, how do you top that? We set the scene for the return of the A-League in season nine.

De Silva at Glory, Nabbout at Victory, plus a Wanderer, a Kiwi flyer and a Jet make up the five to watch

Who do you sing for?

The word from the terraces as we speak with fans from every A-League club (including The Bearded Mariner!)

Harry Kewell sits down with FFT…

The Melbourne Heart signing on being back in the A-League, the Socceroos and his year out of the game.

With a full pre-season under his belt, the former England World Cup star is bullish ahead of the new season – and that’s good news for Newcastle Jets fans

Why this season will give you goose bumps. The word from the FFA bunker

Former Socceroo mixed with the best during his European club career and the Socceroos. Here’s a side that’d give the best a run for their money.

Dura’s best A-League side ever.

This A-League season preview issue is out now - only $9.50 including postage! Or also available on the iPad, with exclusive extra features.

To check out this and other features, FourFourTwo magazine is out now in shops for only A$9.50 (including postage). Click here 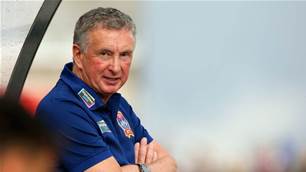