A snapshot of the action from week two of the A-League finals, where Melbourne City and Sydney FC qualified for the grand final.

WHAT HAPPENED IN WEEK TWO OF THE A-LEAGUE FINALS:

"He's just a champion of the code here in this country. So sad that it ended for him the way it did but at the same time we've gained a fantastic person in our football department." - Macarthur coach Ante Milicic after captain Mark Milligan played his final professional game in the loss to Melbourne City, ahead of a move into the Bulls' coaching department

* STATS THAT MATTER: Sydney FC have progressed to their third consecutive grand final and will be aiming to become the first A-League team to go back-to-back-to-back.

* MAN OF THE ROUND: Boyhood Melbourne Heart fan Stefan Colakovski delivered the breakthrough goal for City when he tapped home Marco Tilio's cross against Macarthur in the 54th minute. A minute later, he turned provider, controlling a long ball then putting the ball on a plate for Tilio to double City's lead.

City defender Nuno Reis pulled off an incredible goal-line clearance to stop Charles M'Mombwa handing Macarthur the lead. In the 32nd minute, M'Mombwa pinched the ball away from Aiden O'Neill, rounded Tom Glover and slid a shot towards goal - only for Reis to rush back and make a last-ditch clearance.

* TALKING POINT: Melbourne City already had the home semi-final they were entitled to moved from AAMI Park to Netstrata Jubilee Stadium but will hope prospects of crowds in Melbourne next weekend allow them to host the grand final against Sydney FC in Melbourne. APL commissioner Greg O'Rourke said the league will push for the game to be at AAMI Park.

* WHAT'S NEXT: It's grand final time! Melbourne City will play Sydney FC on Saturday 26 June. City will sweat on the fitness of wingers Craig Noone and Andrew Nabbout, who both missed the semi-final, while the Sky Blues will hope Milos Ninkovic recovers from a calf strain in time.

WHAT HAPPENED IN WEEK ONE OF THE A-LEAGUE FINALS:

* THEY SAID IT: "I'm not ready to retire yet" - delighted Macarthur captain and Socceroos great Mark Milligan told Fox Sports after the Bulls extra-time win over Central Coast.

* STATS THAT MATTTER: Adelaide's 2-1 win over Brisbane Roar was the Reds' first A-League finals victory outside South Australia and the Roar's first defeat in a home final in 11 matches.

* MAN OF THE ROUND: Tomi Juric. The ex-Socceroo has endured a stop-start season but came up trumps for Adelaide with two goals in four minutes in the first half of Sunday's 2-1 win over Brisbane in Redcliffe.

* KEY MOMENT: Charles M'Mombwa picked some moment to score the first goal of his A-League career. The 23-year-old's strike in the first period of extra time at Gosford on Saturday against his former club Central Coast sent 10-man Macarthur FC on their way to a famous win in their first finals appearance.

* TALKING POINT: Will fans be allowed to watch Sunday's semi-final between Melbourne City and Macarthur FC at AAMI Park? The league is expected to make a decision midweek and will be lobbying authorities for the OK to have a crowd following Victoria's COVID lockdown, even in a limited capacity. If crowds aren't allowed there's a good chance the game will be moved away from Melbourne.

* WHAT'S NEXT: Adelaide head to Sydney to face the Sky Blues at Netstrata Jubilee Stadium on Saturday in the first semi-final, while premiers Melbourne City host expansion club Macarthur at AAMI Park on Sunday. It's season over for Central Coast and Brisbane.

Macarthur Bulls coach Ante Milicic says the club is now a hotspot for recruiting A-League talent amid its "very active" preparation for next season, despite losing 2-1 to Melbourne City in their A-League semi-final. 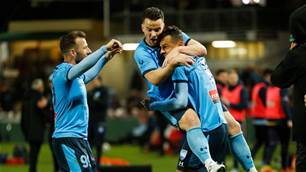