Sydney FC are the A-League Champions after beating Perth Glory on penalties in the grand final at Optus Stadium.

Sydney FC have upstaged Perth's party, snatching an A-League title on penalties after a scoreless grand final to win their fourth championship.

Andrew Redmayne saved efforts from Andy Keogh and Brendon Santalab in a shootout to deny the Glory in front of a record grand final crowd.

The win brings Sydney a fourth title, sitting the Sky Blues alongside Melbourne Victory as the A-League's most successful club once more.

It also sends captain Alex Brosque out on a winning note, the former Socceroo bringing the curtain down on his career.

The result broke Perth hearts, the club still yet to break through for their first title in the A-League era.

For coach Tony Popovic, it brought a similar feeling.

While Popovic delivered the Glory a premiership in his first season at Perth, he is also still waiting for a grand final win after four efforts; the first three with Western Sydney.

This was particularly tough, given the shootout came after Sydney failed to put a shot on target across 120 minutes.

"It was a tight game, there wasn't much in it. We tried to impose our game and they defended extremely well," Popovic said.

"Watching them today was a pleasure for me because we did everything we could to win that game.

Sydney - who have earned three of their four championships from shootouts - proved their prowess from the spot with four expertly taken penalties.

They will feel justice was served after seeing what they felt was a legitimate first-half goal chalked off after 27 minutes when Matthew Spiranovic sliced Michael Zullo's cross into the net.

The linesman incorrectly flagged Zullo, and a video assistant upheld the decision despite replays appearing to show the full-back as onside.

Popovic sprung a surprise by leaving Keogh out of his starting lineup in favour of the ineffective Joel Chianese.

Diego Castro came into the contest and drew the night's first save after half-time with a header from Ivan Franjic's centre.

A furious bust-up between Grant and Jason Davidson soon after saw the game finally come alive, and made the mulleted Sydney FC man a pantomime villain for the rest of the contest.

Redmayne was equal to another Castro header but Glory weren't able to fashion cut-through moments.

In extra-time, Perth looked likely winners, still possessing pace up front thanks to the fresh Keogh and the lively Chris Ikonomidis.

With Brosque off with a tight hamstring, bringing his career to premature end, the Sky Blues were out on their feet.

Sydney's defence, led by a superb Aaron Calver, was able to hold Perth out to a shootout; where Corica's men saluted.

"It's special to win the grand final. I won it as a player and I loved it," Corica, who scored the winner in the 2006 grand final for Sydney, said.

"But it comes down to the boys.

"When the pressure was on, I knew they would come up with the goods."

Milos Ninkovic was awarded the Joe Marston Medal for his man of the match performance, though there was no standout choice for the prize.

The grand final defeat was Sydney's second over Perth in four months; their W-League side won the same matchup back in February. 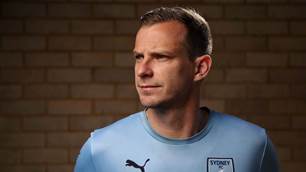 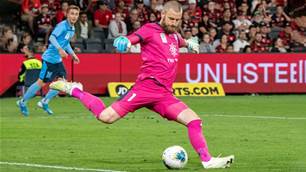 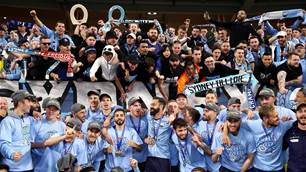