A-League Grand Final: After extra time the defenders for both teams were the standout players on the pitch. After penalties, Perth Glory will have to wait another season to finally get their first toilet seat.

These two teams have had excellent seasons and on the showpiece occasion both sets of players worked hard and put on a show. This season couldn’t be complete without a bit more VAR controversy and Sydney caught the brunt of an iffy non decision there.

The stadium looked gorgeous and fit in a record Grand Final crowd but the hard, slippery surface caused a couple of hiccoughs. The defenders will be thankful that all the worst slips were by attackers.

In the end, penalties had to decide who took home the seat and Sydney Wiggled their way to the winner's podium.

He put himself under a bit of pressure with bad touches on a few occasions but otherwise he didn’t have much to do in the first half. Couldn't come up with any penalty saves during this shoot out.

In the opening stages of the game he was a great outlet for Glory and he continued to be an attacking threat throughout the 120 minutes. His performance tonight was the sort of form that saw him become the Socceroo left back.

It was a defender's night tonight. All the centrehalves from both teams put in good, solid performances.

Didn’t put a foot wrong in what might be his last game.

Perth were playing a little lopsided through most of the game. Franjic wasn’t getting forward as much as Davidson but he put in a good effort. 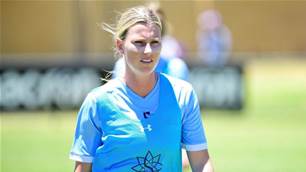