Sydney FC have moved nine points clear of second placed A-League rivals Melbourne City with a 2-1 home win over that team despite finishing with ten men.

The rest of the A-League is now firmly in catchup mode for the Premiers Plate with Sydney FC skipping nine points clear after a character building 2-1 home win over closest challenger Melbourne City on Sunday.

Playing one down for 65 minutes after Socceroos fullback Rhyan Grant was sent off for a late tackle following VAR intervention, Sydney came from a goal down to win with strikes from Adam Le Fondre and Kosta Barbarouses.

Connor Metcalfe gave City a first-half lead but the visitors couldn't capitalise on their numerical advantage against a stubborn defence despite having a lot more shots.

Wellington boosted their unbeaten run to seven games and moved back into the top six with a 3-1 away win over Western United on Saturday.

Phoenix's Mexican star Ulises Davila is arguably the A-League recruit of the season, having scored in his last six games and eight times in total.

He made Wellington's opener against United with a brilliant turn, run and cutback and sealed the win with a clinical finish after sprinting clear of the defence.

It was United's fourth home loss of the season with their woes compounded by injuries to central defenders Brendan Hamill and Aaron Calver.

Adelaide suffered a third defeat in four games with a dramatic 3-2 home loss to Western Sydney, who won for the first time in eight matches.

Two fine headers from German international Nicolai Muller and a goal to substitute Mohamed Adam proved enough for the visitors, though Adelaide missed a glorious chance to get a point in a controversial finale.

Trailing 3-1, United were given two contentious VAR-ruled penalties in second half stoppage time.

George Blackwood converted the first but blazed the second over the bar.

The second spot-kick, awarded after the ball hit the elbow of Daniel Georgievski, left the Wanderers defender so peeved he walked off he field before being coaxed back on.

The decision added to the litany of handball decisions this season which have left coaches, players and spectators confused and angry.

The clash between the bottom two lived down to its billing until Brisbane provided a couple of late highlights in their 1-1 draw with Newcastle at McDonald Jones Stadium.

Roar substitute Bradden Inman equalised with a spectacular finish and goalkeeper Jamie Young pulled off arguably the save of the season from Ben Kantarovski, just moments after getting injured.

The round ends on New Year's Eve, when Central Coast host Perth in Gosford. 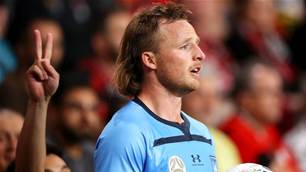 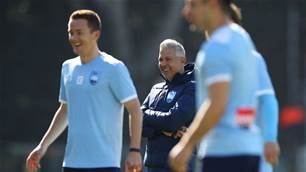