The congested A-League ladder could get even tighter, according to Alen Stajcic, coach of the table-topping Central Coast Mariners.

Central Coast coach Alen Stajcic has predicted the already tight A-League ladder will get even closer as his pace-setting club feels the pressure from rivals snapping at their heels.

Saturday's 1-1 home draw with last-placed Melbourne Victory extended the Mariners' winless run to three but they remain at the top of the table.

Melbourne City are only two points behind and have two games in hand, while third-placed Adelaide could go second if they win Sunday's clash with Sydney FC.

"We're still on top, but the table is so tight and I'm sure it will get even more compact over the coming weeks with so many matches to be played," Stajcic said.

"We've got four days now till we play Adelaide and another five days till we play the Wanderers, so two big games coming up for us."

While the Mariners have lost some momentum, Stajcic wasn't concerned about his side's motivation and desire with more tough games looming.

"I've got no problem with motivation. I didn't see a team (on Saturday) that lacked hunger or desire or tactical discipline," he said.

Stajcic was adamant Victory's goal shouldn't have counted as he said the free kick that produced it was taken while the ball was still moving.

Melbourne slowed things down through the second half and at one Victory goalkeeper Matt Acton was penalised for taking too long with a goal kick.

Referee Alireza Faghani allowed five minutes of added time, but not for the first time this season Stajcic felt short changed in that department.

"Stoppage time is my pet hate to be honest," Stajcic said

"I've spoken to (referees boss) Strebre (Delovski) about it a number of times."

Victory coach Grant Brebner claimed his side could still make the top six, although Saturday's draw still left them 11 points off.

"There was a lot of positives we can take from that and our fighting spirit is certainly one of them," Brebner said. 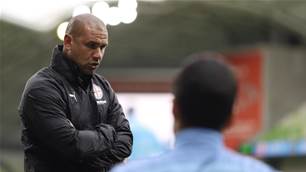