A look at the action as the 2019/20 A-League season kicks off this weekend.

PREVIEW OF A-LEAGUE ROUND ONE MATCHES (all times AEDT):

The A-League champions begin the season for the second-year running in Adelaide. Sydney have recruited strongly but will be without Socceroos Rhyan Grant and Andrew Redmayne as they look to make it 10 games undefeated against Adelaide. The Reds are unlikely to play new signing James Troisi, at least to begin with, but have started life well under new coach Gertjan Verbeek, reaching another FFA Cup final.

Key: Tom Heward-Belle. The 22-year-old will debut in goal for Sydney after Australia refused to release Redmayne from his international commitments.

Western Sydney return to Wanderland after three years of a nomadic existence in the unloved Homebush precinct. Markus Babbel has overhauled his squad and will be desperate to make a winning start at Bankwest Stadium. The Mariners had an encouraging FFA Cup campaign ahead of their first full season under ex-Matildas boss Alen Stajcic but have only won once on their past 24 A-League away days.

Key: Bankwest Stadium. The Wanderers' astonishing success in their early days was built on amazing support and returning to Parramatta will be huge for them.

It's a new era for both Melbourne teams, with Marco Kurz and Erick Mombaerts taking the reins respectively. City have won the past three early-season derbies and they're in form after making the FFA Cup final. City will be without Jamie Maclaren (international duty) while Robbie Kruse (hamstring) misses for Victory.

Key: Harrison Delbridge. With Victory's imposing one-two punch of Ola Toivonen and Andrew Nabbout up and firing, Delbridge has the unenviable task of marshalling City's defence after the departure of Bart Schenkeveld.

Head to head: None

Mark Rudan can expect a hostile reception when he returns to Wellington as Western United manager. The final months of his tenure at Phoenix were clouded by rumblings of his move and Wellington will be out to claim early bragging rights against their former manager, ex-skipper Andrew Durante, goalkeeper Filip Kurto and midfielder Max Burgess.

Key: If there has been plenty of change at Wellington, Steven Taylor is one constant. The gritty defender will have his work cut out against Scott McDonald and potentially Besart Berisha but will also need to marshal his side as the Phoenix look to start their season in style.

Last year's premiers will be itching to make an impression after falling short in the grand final. Robbie Fowler's Roar will be buzzing to prove a point but facing the Glory in Perth is a tough ask. The Roar have a number of young players but experienced striker Roy O'Donovan adds bite up front and the Glory will be wary.

Key: Bruno Fornaroli. The former City captain looks slick and fit after a Tony Popovic pre-season and will be eager to make an early impression after a long enforced A-League lay-off at his former club. 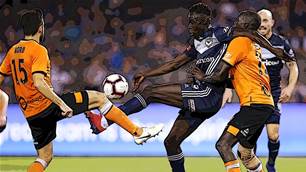 The lowdown: Insider tips on round three