No role on a football field has changed as much as the fullback in recent years. In this article, we'll take a data-driven look to find the best performing A-League fullbacks from last season.

As teams look to overload the middle of the park to keep possession, the fullback role has evolved from a wide defender who might overlap once in a while, into a player that has to be a key attacking outlet - while still remaining a lockdown defender.

And with the different formations that get played in and out of possession, there's a lot to consider when ranking fullbacks.

I'm going to take you through some of the numbers from last season, and we can see what fullbacks had the biggest impact. These numbers will be affected by their team's playstyle and whatnot, but they're a good starting point.

I've broken these up into three sections:

I've also only used players whose main position last season was listed as a fullback or a wing-back - Theoretically, you could break that up into two separate studies, but with the fluidity of attacking and defensive shapes these days, it's really not worth the effort, and would basically be the same article written twice, and nobody got time for that - and I've only used players that played over 900 minutes last season.

Also important to note that all of these numbers are using Wyscout. 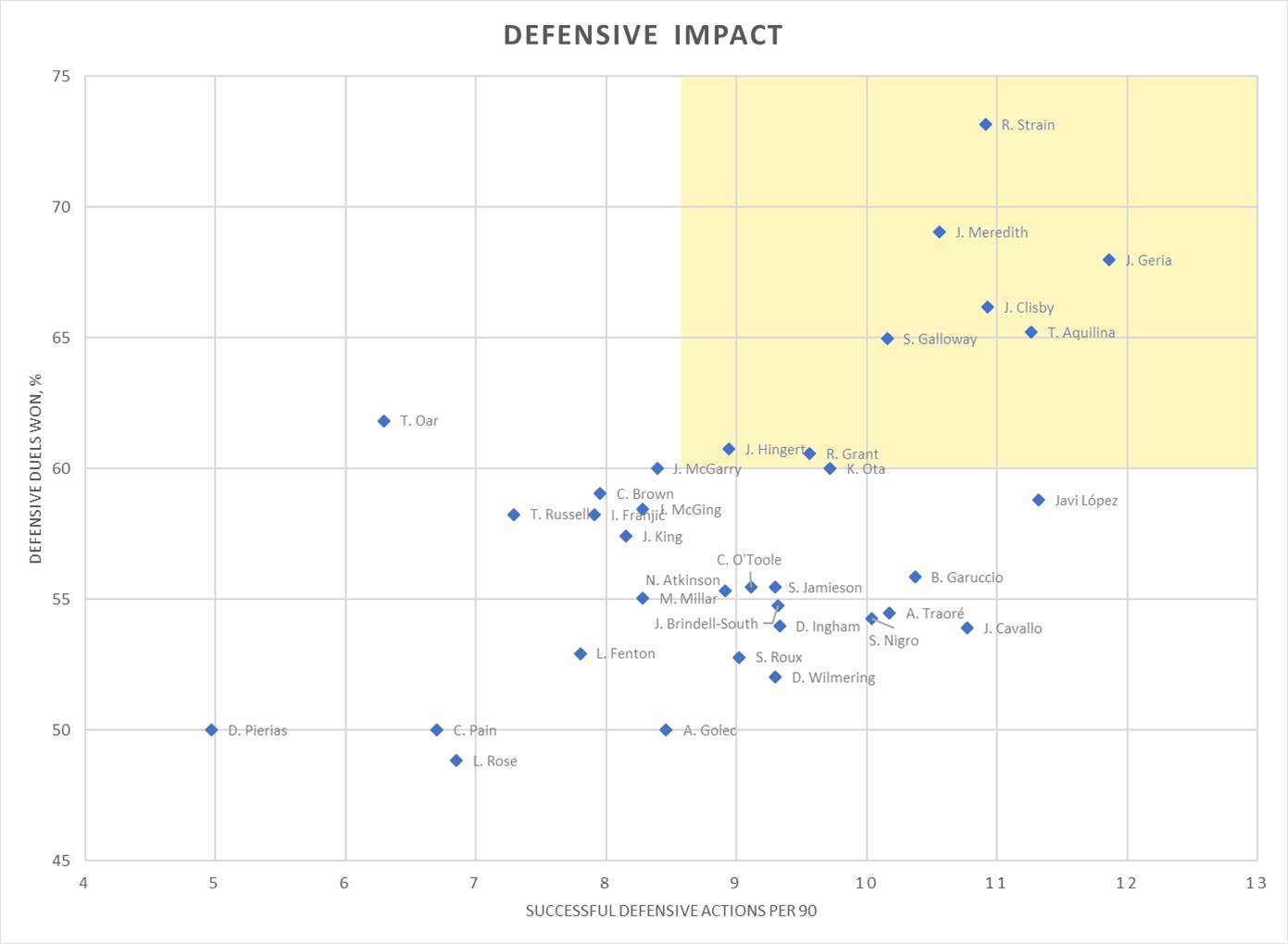 Okay, I thought it would be best to start with the defensive side of the ball - because no matter how good a fullback is when the team's attacking, they do need to hold down their flank too.

To get a general idea of a players' defensive impact, we're going to look at total successful defensive actions per 90, and the success rate of defensive duels.

A defensive action is a defensive duel (when a player tries to dribble past their defender), interceptions and sliding tackles made by the player.

And the defensive duel success rate is just a percentage of how successful a defender was when an attacker tried to dribble past them.

Now keep in mind, when looking at defensive numbers, it can get a bit muddy when using counting stats like the total defensive duels or tackles - a player who is on a poor defensive side will get more opportunities to tackle than one on a team that dominates possession. That's why I like to combine success rates with counting stats, to get a bit more of a clearer picture. Still, defensive metrics are tricky in almost every sport. 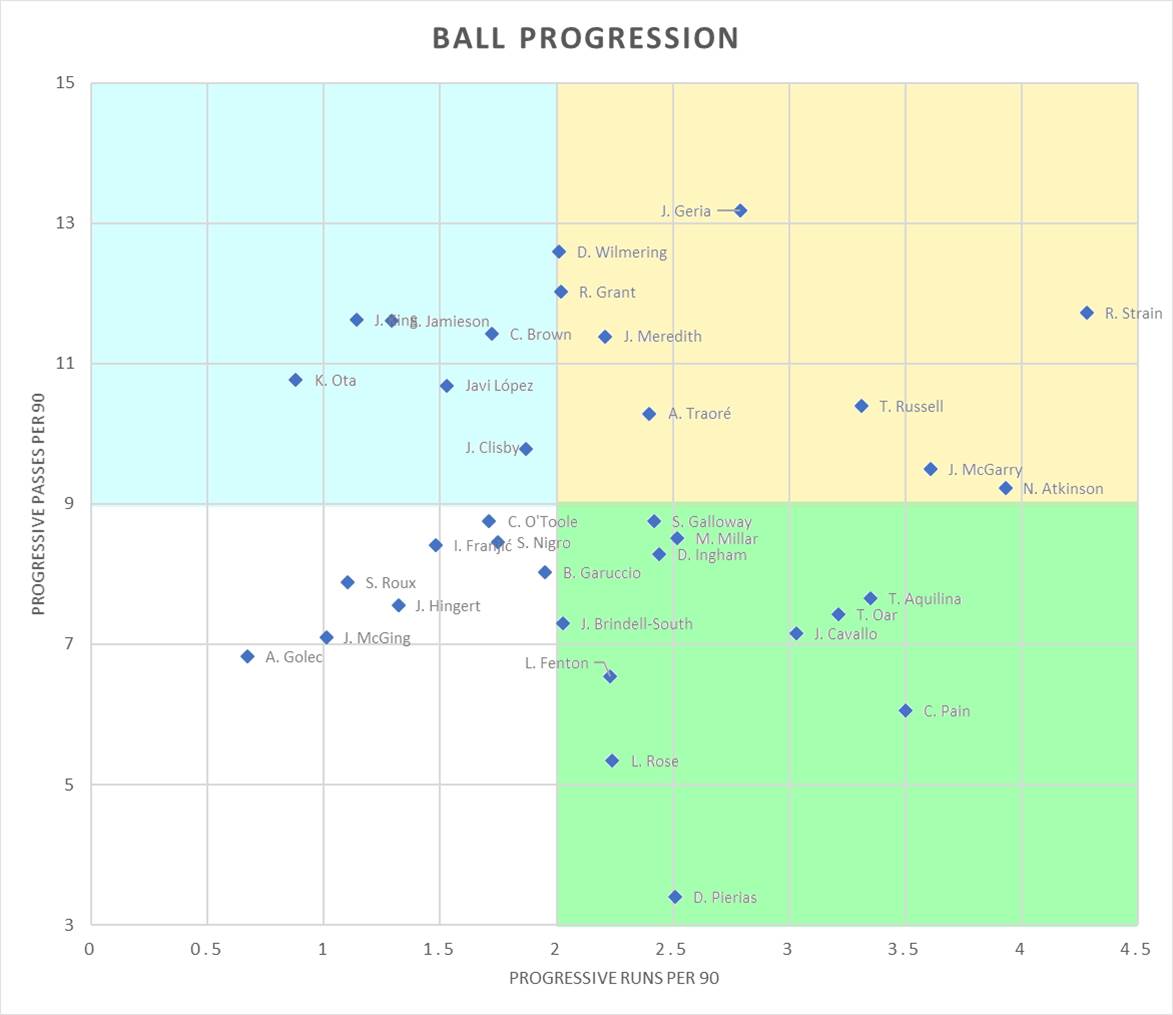 Again, you can see there are some pretty clear styles here. There are players like Tommy Oar, Connor Pain, Josh Cavallo and Thomas Aquilina who are heavy progressive runners, but not a crazy amount of progressive passing.

In contrast, there's a group that includes Sydney FC's Joel King, Melbourne City's Scott Jamieson, and Perth's Kosuke Ota that are heavy progressors of the ball via passing.

And finally, the group that shows more of a rounded ability to progress the ball by passing and running. The clear standouts are Ryan Strain, Melbourne City's Nathaniel Atkinson, Western Sydney's Tate Russell, and Wellington's New Zealand international, James McGarry. All four players were towards the top when it came to progressive runs, and still did well progressing the ball via passes. Ryan Strain was especially impressive for Adelaide as a key ball progressor, leading all other fullbacks in progressive runs and was in the top five for progressive passes per 90.

I'd look at Jason Geria too - at Perth last year, he averaged more progressive passes per 90 than any other full back and was in the top ten for progressive runs. 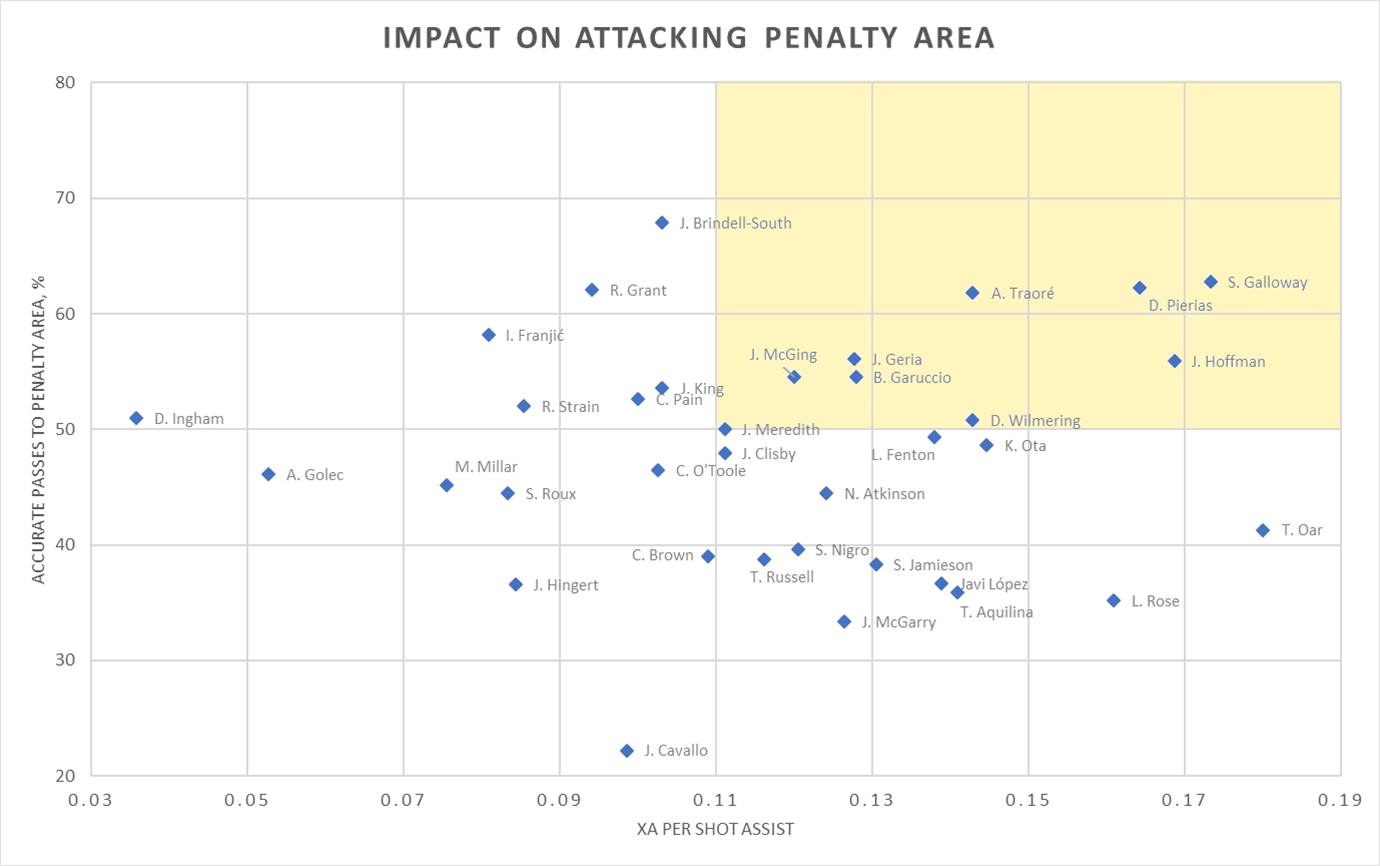 Finally, we're going to take a look at the impact in the final third. To do this I've taken the percentage of successful passes into the penalty area, and the expected assist value per chance created.

Ultimately we're looking at the quality of chance a player creates, alongside how successful they are getting the ball into the box. The players in the yellow box below are above average in both.

You can see that Scott Galloway, Joson Hoffman, and Dylan Pierias are in a bit of a tier of their own here. To be completing over 55% of balls into the penalty box, and creating chances at around the 0.17xA mark is incredibly efficient.

Also, check out Tommy Oar, creating nearly 0.18 expected goals per shot assist - that's a massive number, but his completion percentage into the box is below average.

However, we can look a little further into these numbers too by taking the xA per shot from the prior graph and comparing it to the number of shot assists a player gets in a match. 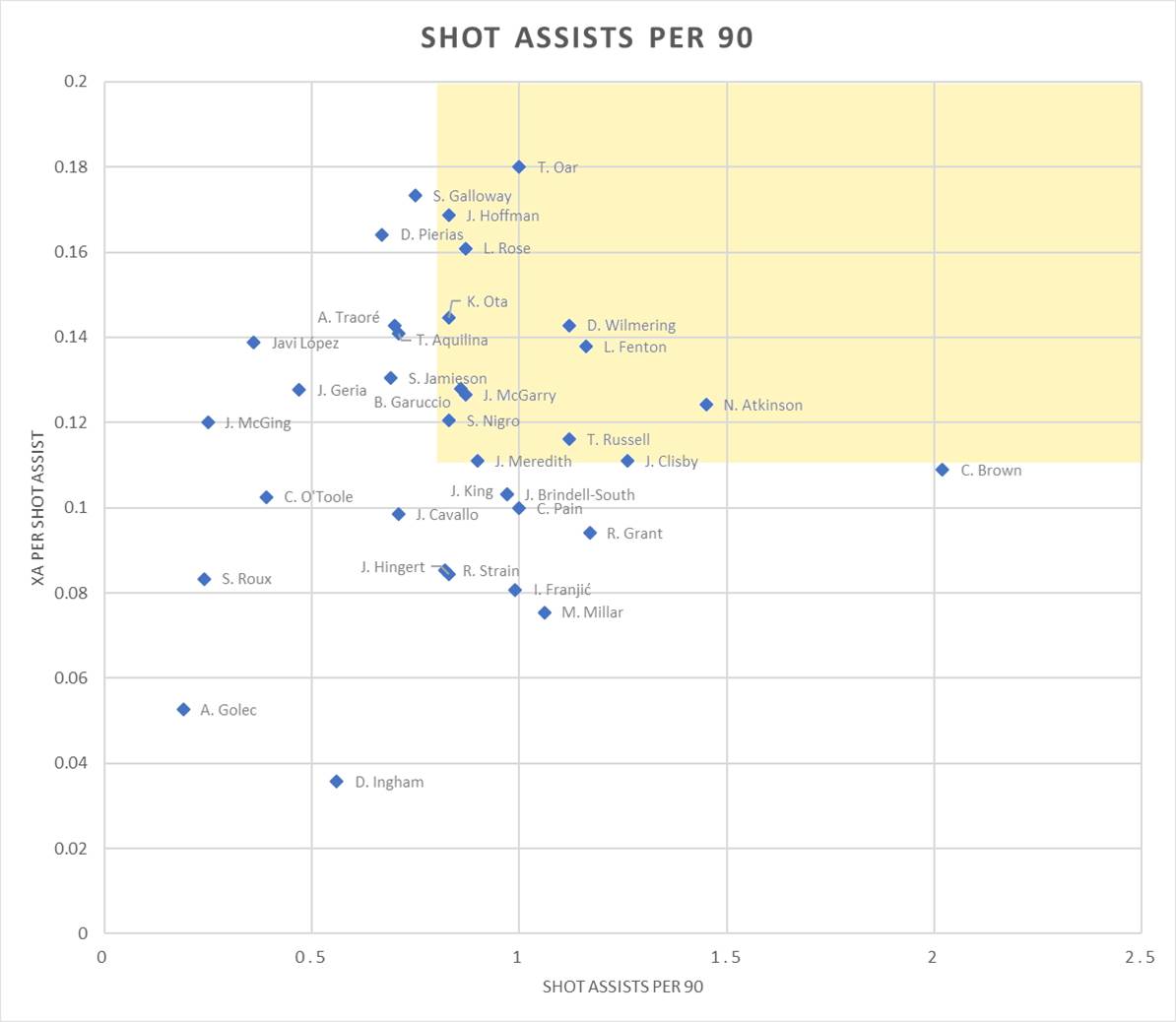 Here you can see who is creating a lot of shot assists (players to the right of the graph), and those who create quality shots (the players higher up the graph).

You can now see players that didn't stand out in the last graph like Louis Fenton and Nathaniel Atkinson do well here when we don't consider the success rate of passes into the box.

There are a few reasons that players might create a lot of higher quality chances but have a lower than average success rate of passes into the opposition penalty box - so it's good to look at both graphs and come to your own conclusion.

Looking at the graphs and data above, you can see there's plenty of really effective fullbacks in the A-League. Here I'll go through a few that stand out in these graphs.

Ryan Strain: Elite defensive numbers, elite ball progression and effective in the final third. Strain had a great season for Adelaide in 2020/21. He's moved off to Maccabi Haifa in Israel and will leave a hole in Adelaide's side.

Nathaniel Atkinson: In pretty much all of the attacking numbers shown, Melbourne City's Nathaniel Atkinson shows a lot of promise. His defensive numbers were similar to other fullbacks in the league too. Atkinson showed his versatility last season, playing as a winger towards the end of the season, with the man of the match performance in the Grand Final being the icing on the cake.

Adama Traoré: Was a key ball progressor for Melbourne Victory, and had an impact on the attacking penalty box too. He'll move to Western Sydney this offseason - which isn't a terrible thing at all, but we've seen a few young fullbacks do well here, so Carl Robinson will have his work cut out to make sure players like Thomas Aquilina get time to develop.

Scott Galloway: Another Melbourne City man with an awesome impact on the game. Galloway showed impressive defensive numbers, was a heavy ball progressor, and also created incredibly high-value chances for his teammates. Galloway, the previously mentioned Atkinson, along with the captain and ever-impressive Scott Jamieson give the reigning champs a range of top options at fullback.

What Does it all Mean?

There's plenty of other great fullbacks out there, and plenty of ways to see who stands out. These numbers are a great starting point though when looking back over a season.

You can use articles like this not only to see who the better performers are but also how particular signings might fit into new systems. For example, I'd expect James Meredith to offer a lot to Macarther FC next season.