Newcastle Jets have signed former Arsenal defender Carl Jenkinson for the next two A-League seasons after the Englishman's stint with Melbourne City.

The 30-year-old spent the second half of last season with Melbourne City on loan from Nottingham Forest and has been a free agent since his contract with the newly promoted Premier League club ended in June.

Jenkinson scored two goals in 22 appearances for City, winning last year's premiership but his last game for the club was the 2-0 grand final loss to Western United.

On Arsenal's books from 2011 to 2019, Jenkinson played in the UEFA Champions League for the Gunners and also had loan stints at West Ham and Birmingham City before leaving the Emirates.

His move to Forest in 2019 didn't work out, making just 11 appearances for the club before joining City in January.

The son of an English father and Finnish-Swedish mother, Jenkinson represented England and Finland at youth level but made his senior England debut in a 4-2 friendly loss to Sweden in 2012.

"I knew within five minutes of speaking with Arthur (Papas, Jets coach) he was a manager I wanted to play for," Jenkinson said.

"We have a similar outlook on the way the game should be played and I know he has big ambitions for the club moving forwards.

"I'm excited to be a part of this team and I will give my all to achieve something special here."

Jenkinson is one of several new faces at the Jets with Arthur Papas rebuilding a squad which finished ninth last year and missed out on finals, joining arrivals including Brandon O'Neill, Reno Piscopo, Jaushua Sotirio and Trent Buhagiar.

"Carl's signing is a coup for the club and the region," Papas said.

"Carl is able to fill any position across the backline, suits our attacking way of playing and will play a key role in taking us a step closer to achieving our ambitions." 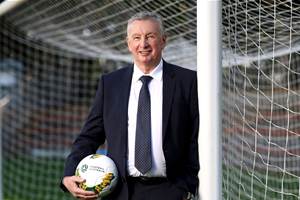