Jamie Young says Brisbane Roar will need to keep their defensive discipline if they are to knock off Sydney FC today.

Roar are searching for their third win of the season when they meet the Sky Blues at Kogarah.

Brisbane is coming off a 2-0 win over the Mariners last weekend.

Young was back into the starting side last weekend, for the first time this season, and helped Roar notch up a cleansheet.

"As a goalkeeper keeping cleansheets is important, but of course it’s not always down to me in that sense,” the 34-year-old said.

"The back four defended pretty desperately in our box. We showed great discipline in the game against Central Coast and we’re going to need to have that same discipline and drive as well against Sydney.

"They’re obviously a competent team. They’ve got a lot of attacking options, they’re very strong in defence. But really we have to focus on us and how we can affect the game. If we do get the win, it will be quite galvanising.

"There’s no reason why we can’t give them a good game. The main attitude to have for this game is to really take the game to Sydney. Work as a team, be cohesive, be hard to beat.”

Young will make his 100th A-League appearance on Saturday.

The keeper, who is in his sixth season with Brisbane after returning from England, said he is purely focused on beating the Sky Blues.

“But with that said the focus is really on the game against Sydney. That’s where my mindset will be.” 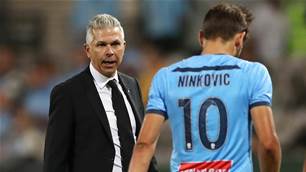