Melbourne City coach Patrick Kisnorbo will miss the A-League club's next two games after tearing his Achilles, with assistant Des Buckingham to take the reins.

Melbourne City will be without coach Patrick Kisnorbo for their next two A-League games after the former Socceroo tore his Achilles in a charity football match.

Some football royalty on the pitch as we kick off the Tony Clarke Memorial Day between a match between the Copperoos and the former Socceroos pic.twitter.com/9CDogxSo3g

Kisnorbo suffered the injury in the game on Saturday then had surgery on Sunday and requires a rest period before returning to coaching.

Assistant coach Des Buckingham will take the reins for City's upcoming away match against Perth Glory on Wednesday and their home game against Brisbane Roar on Sunday.

Buckingham previously led City to a 2-0 win over Western Sydney on March 2 when Kisnorbo came down with suspected food poisoning before the match.

Kisnorbo will coordinate with Buckingham during his rest period but City are optimistic the senior coach will be back on the sidelines for their home game against Adelaide United on May 13.

They are currently three points clear on top of the A-League table in his first season in charge. 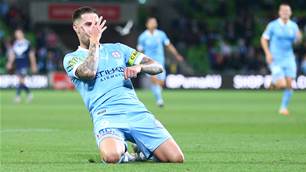 City focused on Glory, not distractions