There is always a chance in football and for Adelaide United, the team that reached the final of the 2008 AFC Champions League against all expectations, the quest to reach the knockout stage in 2017 is far from over.

Two things must happen tonight. Adelaide must defeat Jiangsu Suning at home and hope that Gamba Osaka get something, anything, at Jeju United.

The good news is that Jiangsu is already top of the group and is looking forward to a place in the second round for the first time in its history.

The 2016 Chinese Super League runner-up has left its foreign contingent including big-money Brazilian buys Alex Teixeria and Ramires as well as captain Wu Xi at home.

There are no direct flights from Nanjing to South Australia, making a long trip that bit longer especially as it is sandwiched by crucial league matches. 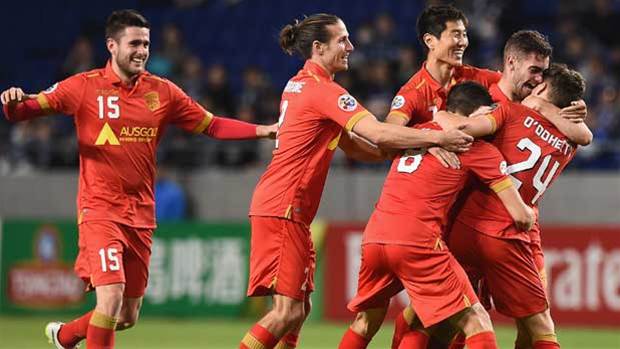 And league matches really are crucial at the moment. Coach Choi Yong-soo is under intense pressure because of the eight domestic games so far, Jiangsu has yet to win a single one.

A season that was supposed to bring another title challenge started badly. But that bad start is in danger of becoming a fight to survive in the top flight.

If Jiangsu had not had the four wins in Asia to take it through to the second stage then it is likely that Choi would no longer be in place.

Regardless, there is growing speculation in China that Choi could be on his way out.

He had promised to win the game against fellow strugglers Yanbian Funde on Friday but had to settle for a 1-1 draw that came thanks to Teixeria’s second half equaliser.

Assuming the South Korean lasts until next Sunday’s game at home to Shandong Luneng, another failure to win would likely spell the end for the former FC Seoul boss.

Taylor Regan says the Reds will do whatever it takes to grab their third win of the season against Newcastle Jets.

If this was played in China, the stars would likely be fielded in a bid to get a confidence-boosting win but given the domestic situation, risking injuries to a star player in a  dead rubber far from home would not go down well at home.

This does not mean that it will be easy for Adelaide but given the fact that the Reds were unlucky to lose in Nanjing earlier in the round, playing a weakened team at home should not be a daunting prospect.

If all goes well at the Hindmarsh then Adelaide’s attention will be fixed on Gamba Osaka.

For United to go through, Gamba, the winner of that final back in 2008, need to avoid defeat at the home of Jeju United, currently second above Adelaide.

It is possible as the Japanese team is going well at home and both teams are unpredictable in Asia.

Jeju won the fixture in Kansai 4-1 but not too much should be read into that. It is a game that could go either way.

Western Sydney Wanderers were humbled 5-1 by Shanghai SIPG in the ACL overnight.

Meanwhile, both Western Sydney Wanderers and Brisbane Roar have nothing to play for and are out of the running for the knockout stage.

Brisbane face the also eliminated Ulsan Hyundai Horang-i of Korea Republic who will be bringing a second string to Queensland. Western Sydney hosts the already through Shanghai SIPG with fans unlikely to get a look at the Chinese team's stars such as Hulk, Oscar, Wu Lei and Elkeson.