Melbourne City’s elimination final with Adelaide United is not just a chance to extend their A-League season.

It’s also a referendum on the future of coach Warren Joyce.

The English manager is at the end of a bitterly divisive two-year contract to lead the expansion side.

City executives are giving little away as to whether the former Manchester United assistant will be offered a new deal.

And Joyce himself hasn’t said whether he’d like to extend his tenure in Melbourne, saying only he “ain’t a quitter” in February when asked if he’d walk away from the role during a downturn in form.

After three semi-final appearances in four seasons, the best-resourced club in the league would surely see a failure to reach the last four as regression.

"I think for players it's pretty straightforward,” captain Scott Jamieson said. “If we win the title then you don’t really sack a manager that wins the title do you?"

In Joyce’s two seasons, City have finished third and fifth.

Last year, the Daniel Arzani-inspired team were on the verge of a maiden grand final, falling victim to Riley McGree’s wonder-goal in their semi-final loss to Newcastle.

The goals have dried up this campaign, with only a final-round 5-0 smashing of Central Coast Mariners preventing their worst season since the City takeover in 2014.

That’s in part due to the protracted and acrimonious departure of fan favourite Bruno Fornaroli after the Uruguayan was deemed to have fallen short of off-field standards.

That turnover led fans to protest his Joyce's leadership.

The club's fan group disbanded and crowds plummeted this campaign despite a 12-game unbeaten streak at home.

Given the underperformance and tumult, what’s the case for Joyce to stay?

City’s owners are pleased with the cultural change under Joyce, which places a premium on hard work and professionalism.

They’ve also been delighted by improvement in young players, led by Arzani, with future transfer deals similar to Aaron Mooy’s mega-money move likely to keep them in the black.

Jamieson said the bottom line had to be success.

"I want us to win games," he said. “If we win the title then he probably stays but if he doesn’t he probably might stay too.

“It’s never really gotten to the players in a sense of us worrying about it. Managers come and go. Players will come and go. That’s just the nature of the business.

"For me to go on the record and saying I want this about staff or coaches or players even is above my pay grade.

"There’s no denying that we enjoy working with the manager but we don’t make those decisions." 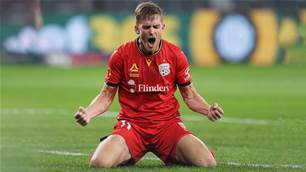