The Spanish midfielder has told the Reds he's moving overseas, most likely to a Qatari club.

Isaias, a four-time club champion, says he agonised over the decision.

"It is a decision that I have given a lot of thought to and one that I feel is right for my young family," the 32-year-old father of two said in a statement on Monday.

"Given my age and the stage of life that my wife and I are at with our two young children, this decision will help us in the future in many ways as my career gets closer to its end.

"I know this is not something the club have wanted to allow but their consideration of what is best for my family and I has been amazing."

Isaias joined Adelaide in 2013 and has been captain for the past two seasons, becoming the most decorated Reds player.

The Spaniard won two FFA Cups and was also a key member of the club's 2015/16 double when it won the Premiers Plate and championship - he was best-afield and scored in the grand final win.

Isaias, who has two children under the age of four, both born in Adelaide, earlier this year became an Australian citizen. 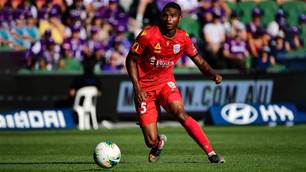