Adelaide United coach Gertjan Verbeek knows next to nothing about Newcastle Jets before their Tuesday night FFA Cup quarter-final.

And Verbeek, still settling into Australia as United's coach, says he's not worried what challenge the Jets will offer.

"No, not at all because I don't know. And things I don't know, I can't know," Verbeek told reporters on Monday.

"Of course I ask some people who have been around longer here in this competition but it's always difficult.

"To rely too much on what the opponent is doing, I think it's the wrong situation.

"Most time is almost 95 per cent ... into your own team and your own philosophy about how you think to go and win the game."

Adelaide's home fixture against the Jets is Verbeek's first official competitive game against an A-League club since being appointed Reds coach in late May.

The Dutchman said he was satisfied with how his squad was gelling - with a caveat.

"They make progress in training but now I have to see it in a game," he said. "That is the most important ... the results.

"You have to keep on going to keep some confidence and convince the player that this is way for this team to be successful - you need winning games.

"The last few trainings are of good quality, they understand much more than in the beginning." 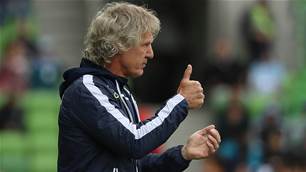