Reading boss Nigel Adkins has remained positive despite the club's relegation from the Premier League being confirmed on Sunday.

Reading were held to a goalless home draw by QPR at the Madejski Stadium, a result that sealed the fate of both clubs.
But, instead of bemoaning the club's failure to maintain their top-flight status, Adkins looked ahead to next season, and praised his players for their endeavour in the final stages of the season.
"The fact of the matter is we're down," Adkins said.
"We needed to win and we haven't, what we have to do now is get ourselves ready for the Championship.
"We know where we are going to be for next season now. We have players who have experienced the Championship, but like all clubs there will certainly be players coming and going.
"We learned the lessons from being in the Premier League and the objective will be to get back to the Premier League.
"I've been here for five games now. What happened previously is something that was not in my control. All I can do is look at the players, their attitude and application - there are a lot of positives. We're looking to play a certain way."
Adkins is also hopeful side's experience and know-how in the Championship – having been promoted as winners last term – will hold them in good stead next season.
"I think when we look at it, we have only won four all season," he said.
"Since Arsenal to now, I think we have improved. Everyone can see the ideas we are trying to implement.
"We've got a really good group of players, they won the Championship last season, but unfortunately the Premier League got away from us this year.
"The lads have given us everything on the training ground and in games and I have a lot of respect for the players for doing that." 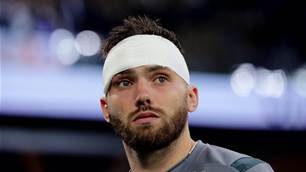