It was supposed to be the start of something special - at the age of 18 Musti Amini signed a long-term deal with one of the biggest clubs in the world.

In 2011 Amini, then one of Australia's most promising teenagers, inked a four-year deal with German giant Borussia Dortmund.

The midfielder had caught Jurgen Klopp's eye and he left Central Coast to move to Europe. He was on his way.

But the move did not pan out how Amini, or Australian football, envisaged.

The Sydneysider never played a first-team game for Dortmund over the next four years, was sent back on loan at the Mariners during the 2011/2012 season, and ended up making 57 appearances for the Bundesliga club's reserves side.

He eventually left in 2015, linking with Danish side Randers, and is now a key player at the Supaliga's AGF and a fully-fledged Socceroo.

Amini has established himself as a star in Denmark.

But the 26-year-old admits now he wasn't ready for his big move to Die Borussen nine years ago, and didn't have the knowledge to look after himself off the field.

"At 18 I went there and I didn't know the way of being a professional footballer," he told the Socceroos podcast.

"I just went there, kicked the ball around and went 'OK this is cool'. But there's so much more to it about living, sleeping right, eating right. It was tough to go there as an 18-year-old, I didn't know how to cook.

"I was eating out every night. It was nice but in the end it wasn't what a professional footballer should be doing. I had my three years there, which was a great three years. I sat on the bench in the Champions League and that kind of thing - it was great.

"But if I could go back with a different mindset of learning to sleeping right and eating the right type of things, because as an 18-year-old you're just going there, you don't know much.

"It was a big step to looking after myself, not just on the football pitch but off the football pitch. I've learnt a lot in that way. When I look back... I was sometimes not eating breakfast, sleeping at different times... I was just a young boy in Europe.

"And I finally found out hey there's a lot more than just being able to kick a ball. That's where you see the likes of Cristiano Ronaldo, the discipline he has and even at the age he is now.

"I've learnt a lot in that way and now I'm better off for it." 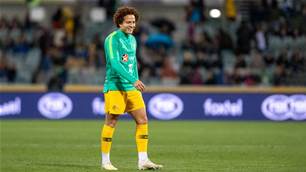