The fitness expert was an integral part of the unforgettable Western Sydney Wanderers’ Asian Champions League triumph in 2014. But the A-League challenge was never going to be enough for Waterson.

In early 2018, the Aussie was brought in by the MLS' most storied club. LA Galaxy, spearhead of a US league that's been supercharged by investment to become a genuine rising power in world football.

After stints in the Korea Republic and outside of football, Waterson, 37, joined the US club made famous by David Beckham, Robbie Keane, Landon Donovan, Steven Gerrard and a few outrageous goals by Ibrahimovic (oh, and national anthem singing sensation Malea Emma, google her, she's amazing). 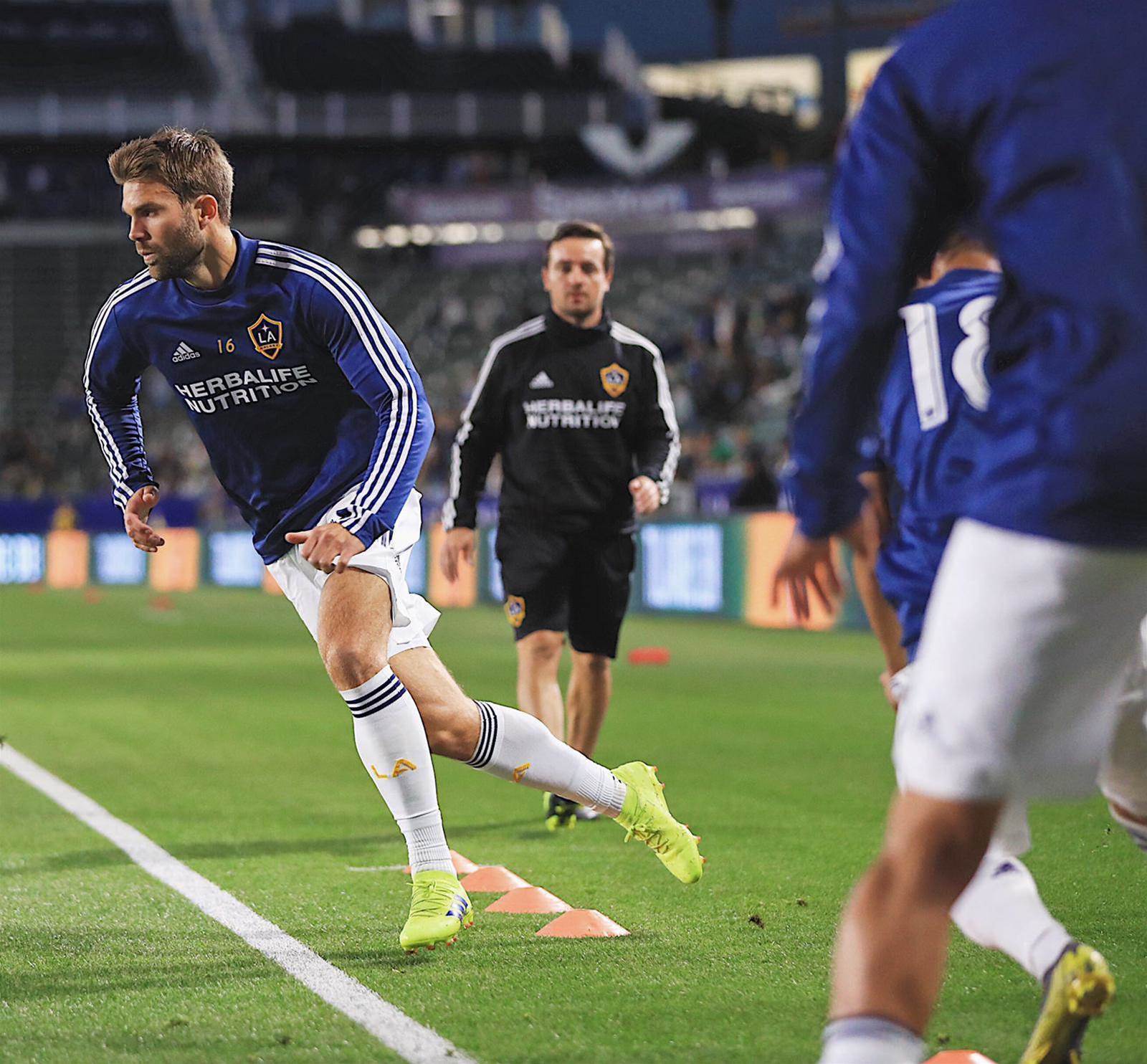 Waterson has seen for himself that Galaxy is a huge club compared to your average A-League outfit.

As an example, not only is the Swedish superstar their headline act, they’re coached by former Boca Juniors boss Guillermo Barros Schelotto, who was in charge during the Argentine club's infamous Copa Libertadores Final against River Plate.

And the MLS itself is attracting world-class talent from around the globe, such as Wayne Rooney and ex-EPL and Portugal star Nani.

It’s an exciting place to be for the Aussie, who is proving again why our sports science experts are so well respected around the world. FTBL sat down with Waterson to talk MLS vs A-League, what Australia must improve on and of course, his relationship with Zlatan...

Adam, talk me through an average day at LA Galaxy?

First team training starts at 10 am, however, my day starts when I arrive at the training ground around 7.30am.

I work really closely with the Team's Sports Scientist, Will Sparkes. Firstly, we look at the players’ wellness, which they complete before coming into training using the Kitman Labs App (which processes and analyses individual athlete data).

We want to make sure the players have adequately recovered from the previous day’s training and are ready to cope with the demands of the training day ahead.

We monitor players fatigue, sleep quantity and quality, muscle soreness and the quality of yesterday's diet. We then compare their overall wellness score against their average to see how they are tracking. In collaboration with medical staff, we then meet as a performance team and make recommendations to the coaching staff on each player’s training status for that session. Here we also discuss the players’ weekly loads versus their average weekly load over the past month. This gives us an indication of fatigue vs freshness for each player. Ideally, we try to keep players as balanced as possible with safe increases and decreases in load where appropriate.

I then facilitate an activation/prehab session for the group which basically aims to help prepare the players for the demands of the session ahead, it also gives us a small window to address player asymmetries or weaknesses established from ongoing screenings/testing we do.

I then head out to the pitch and set up and deliver the team's warmup.

I try and deliver a warm-up which fits in with the overall "theme" of the day’s training. For example, if the coaches are working intensively on small possession games I will tailor the warm up to mimic these movement patterns.

This means lots of changes of direction, acceleration/deceleration and short, explosive movements to best prepare the player's body to maximize performance in the drills and reduce the potential of injury.

What about players in the rehab phase?

Once the warm-up is complete I then turn my attention to the players who may be returning to training following an injury.

A big part of my role is the backend stage of rehab where the player is able to return to running and then re-integrate into the team training and eventually the game.

We work closely with the medical team to make sure a player has been able to "tick off" all the performance variables which they perform in a game prior to returning into the team training. These include variables such as high-speed running, sprinting distance, max velocity running, and explosive efforts. 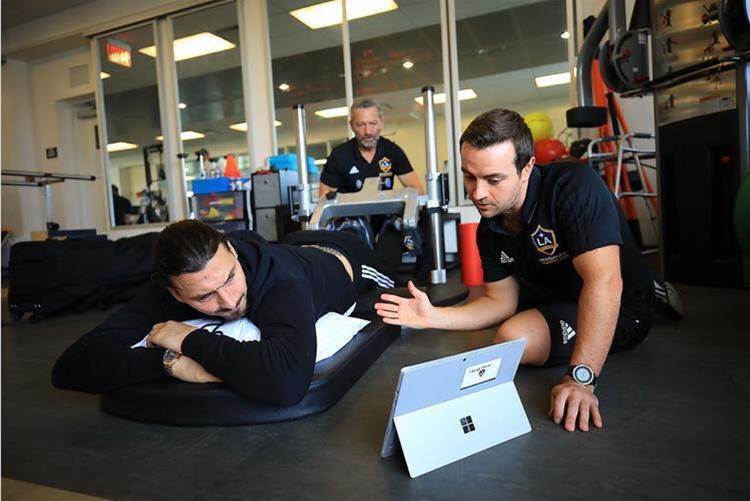 Waterson working with the great Zlatan

We generally have individual targets set for every session that we aim for our players to accomplish, so this live system is crucial for ensuring the intensity of the session is adequate.

If players hit targets during the session we have the option of modifying, on the other hand, if we didn't meet certain targets we can then add "top-ups" at the end.

Once training is complete, if it’s a double day, we then head into the gym to perform a strength session.

These sessions differ depending on where we are in our training cycle and days between games, but we focus on our players not only maintaining their strength but continually increasing their strength and power where possible right throughout the entire season.

What's been your perception of the MLS versus the A-League?

MLS is a very good standard league. It’s about 10 years older than the A-League and is improving every year. The MLS currently has 24 teams and this is growing.

A lot of the "marquee" players that are joining teams in MLS now are world-class players in their prime.

In saying this I really do believe that the top three or four teams in the A-League could compete well in the MLS. The A-League is a strong league, I just hope it continues to grow with more teams and the salary cap continues to increase to allow even more quality to come in.

The work ethic of the Australian players I’ve been involved with was always first class.

Both the MLS and A-League have a lot of travel, with MLS games across the east coast and west coast. Time zone changes are also apparent in both leagues when on the road, so I do believe there is a lot of similarities. 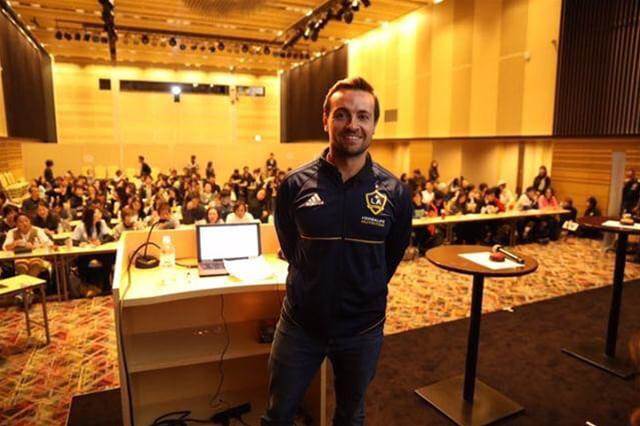 The facilities here in LA are excellent, players are looked after very well. Each team in the MLS is allowed seven to eight foreign players, and this also improves the standard of the league.

At LA Galaxy, we are extremely well resourced. We have a strong medical and performance team. We have access to some fantastic technology and all of this helps us in various ways in looking after our athletes and improving their physical performance as best possible.

This is where the A-League needs to improve.

Australia is a world leader in medical, sports science and strength and conditioning but during my time in the A-League, the fitness coach was forced to wear many hats. It’s not uncommon for the S&C coach to also act as the sports scientist, nutritionist, psychologist, which over time is not sustainable.

I know that some clubs have recently invested into their backroom staff a lot more recently and I am sure that this will continue to improve as new clubs enter the league in Australia.

Obvious question: Zlatan, how would you describe working with the big man?

Zlatan demands a lot from players in training. He has played at many of the world’s biggest and best clubs so he expects a certain level of quality from those around him. He certainly helps raise the intensity in training.

Some of the things he does on the pitch and in the gym leave you in awe.

He is a very witty man, I enjoy the banter he brings to the group. I have quite a good working relationship with him,  I just wish he would wear his GPS (haha). One word to describe living in LA?

I love all sports so being able to on any night of the week attend or watch either an NBA, MLB, NHL, NFL or College game is quality!

You don’t get that back in Oz.