Every A-League round, we hand out our FTBL awards for the brilliant, bad and bizarre moments each week. In round 19, handball laws continued to confuse everyone, one striker continued to single-handedly lead his side into the finals, whilst another finally found the net this season.

Matt Derbyshire has quietly gone about his business this season after a somewhat slow start. He has become Macarthur's primary source for goals.

The Englishman's thirteen strikes equate to almost 50% of the Bulls team total, 29.

What a striker Derbyshire is. Steps up when it matters #MACvMVC

Their next highest goalscorer is Markel Susaeta, with just three, whilst Loic Puyo, Beñat and Tommy Oar have netted just three between them.

Macarthur has done well in their inaugural campaign. Still, they have often been somewhat dull and passive in their games. If it weren't for Derbyshire's predatory instincts, they probably wouldn't be sitting in the six right now.

Ante Milicic's big challenge is finding a way to get more attacking output out of his talented group of attackers. There is only so long that Derbyshire can carry the goalscoring burden in this team.

We'll try to keep this one short but not sweet, as I'm sure everyone is sick of discussing handball laws and their implementation in the A-League this season.

Sydney FC was awarded a penalty against Western United on Saturday that seemed to go against some of the decision-making earlier this season.

At the start of the season, if the ball ricocheted off another part of a defender's body but still hit their arm, play continued.

This ruling was notable when Aleksandar Susnjar was not penalised for a blatant handball against Newcastle in round 4.

For some unknown reason, Ivan Vujica did not get the same benefit of the doubt as Susnjar.

Despite the ball hitting his thigh before it struck his arm, Shaun Evans still gave the penalty after a second look at the pitchside monitor.

Maybe IFAB (or the bureaucrats in the bubble, as Andy Harper would say) have made a change to the rule, but surely for greater consistency that would come into effect from next season?

It doesn't seem right that referees can judge different games on different laws throughout one season.

Also, if IFAB is determining that it is only handball if the defender "plays at the ball", surely that wouldn't apply to Vujica's on the weekend?

At this rate, you might as well make it as black and white as possible. If it hits the arm, it is a penalty; otherwise, play on.

The Who Knew He Had That In His Locker? Award

We were starting to run out of superlatives for Jamie Maclaren this season until he surprised us with a sensational free-kick in City's 2-2 draw with Wellington on Sunday.

Maclaren netted his 25th of the season by strolling up to a free-kick and putting it into the top right corner to give Oliver Sail no chance.

J-Mac's link-up play and selflessness has significantly improved along with his regular goalscoring exploits, but who knew he had a free-kick like that in his locker too?

The Socceroo should break the single-season record for goals currently held by Sydney FC's Bobo (27 in 2017-18) and is the most straightforward selection choice in Graham Arnold's squad for the upcoming qualifiers.

The question on everyone's minds now is if he could reach an untenable feat of 30 in one season.

Is Jamie Maclaren having the best individual season we have EVER seen by a player in the A-League?

The Patience Is A Virtue Award

It is all about the strikers for this week's edition of our awards.

In our third striker's award, Andy Keogh is the recipient for finally finding the net for Perth Glory this season, and on his birthday, too, believe it or not.

The Irishman has struggled in his third stint back at the club, and although he has picked up six assists, regular starts have been hard to come by.

That's why it was such a shock not just to see Keogh break his drought but net an astonishing four times in the process, with some genuinely stunning strikes in that bag as well.

When it rains it pours! Andy Keogh! #PERvWSW

The first was a bullet header from a pinpoint Kosuke Ota cross before Keogh produced one of the best goals this season for his second.

He spotted Daniel Margush off his line and lobbed him with a speculative volley from just inside the Wanderer's half.

The striker's final two strikes weren't as spectacular (a penalty and a back-post tap-in), but who cares? He's well and truly back for Perth, at a time when they need results desperately.

As the old saying goes, you wait ages for a bus and then two come along at once (or more in this case). 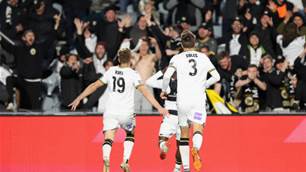 ‘The hearts of football fans’: Greatest stories from A-League finals week one 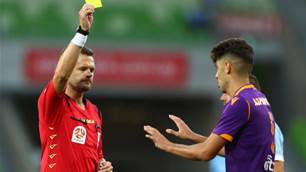 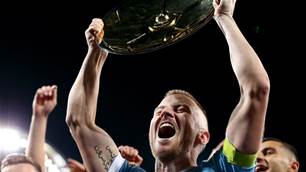 FTBL's A-League Awards for Round 20