Brisbane Roar are sweating on the fitness of Daniel Bowles as the struggling A-League outfit’s defensive crisis deepens.

Roar has been reduced to just five defenders after three – Luke DeVere, Jack Hingert and Dane Ingham – picked up season-ending injuries after the transfer window.

Bowles was playing at right back on Friday night when he was subbed at half time with an unspecified injury.

It was another defensive horror show for the former powerhouse which was thrashed 4-1 at home by Western Sydney Wanderers despite opening the scoring in the 7th minute through Dylan Wenzel-Halls.

A stunning solo effort from @WenzelHalls!

Interim coach Darren Davies had to rely on two teenagers to plug the backline and admitted he was scouring the NPL for some injury replacements to see out the season.

“Playing Bowlesy at right back? Well we’ve only got five defenders so it wasn’t too much of a decision,” Davies said post-match.

“After the transfer window closed we lost three defenders. Now that the transfer window is closed you can only bring in NPL – which we are having a look at – and anybody who was out of contract in the January window.  It’s very very difficult at this moment in time.

“We’ve literally got five defenders including young Izaak Powell who is 17-years-old. So there are very limited options. Hopefully Bowlesy hasn’t done anything too significant and he’ll be able to recover.”

Davies said Powell was subbed on 66 minutes after “running out of gas” but remained upbeat about the youngster’s progress.

“Look he can only get better.  He’s a 17-year-old boy, young man, playing consistent game time in the A-League. He’s going to learn from it.

“We’ve played Daniel Leck at right back. He’s 19-years-old. He’s not a right back he’s a right winger. So we played with a 19-year-old right back and a 17-year-old left back.

“Yes (the result) is disappointing. We weren’t as good as we wanted to be tonight but there are positives that young players are getting game time.”

Roar are sitting in 9th spot on the A-League ladder have kept just two clean sheets this season, shipping 16 goals in the last five games alone. 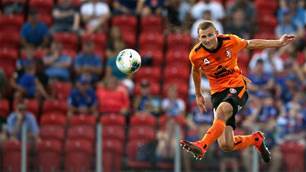