Red Bull's Neymar Jr's Five is one of many opportunities opening up for Archie!

Australian football legend Archie Thompson has recently joined as an ambassador for Red Bull’s Neymar Jr’s Five tournament, as the competition begins to heat up ahead of the National Final in Melbourne early next month.

When the opportunity arose to come onboard as an ambassador for the tournament, he jumped at it.

A fan of Neymar and Brazilian football, Thompson was delighted to join up and be involved when Red Bull came knocking, especially after finding out more about the tournament.

“It’s a cool little concept which gives you the opportunity to meet Neymar,” he laughs. To the former Socceroo’s surprise, he was amazed to see just how many people play indoor football, possibly giving the likes of Brazil an edge in the round ball code.

“I think that it is why Brazil, Argentina and all these South American guys are so talented and skillful,’’ he says.

“They play on the streets, they play five-a-side and little games where you work on your skill and technique - something that I think we don’t do enough of in Australia.

“It’s a good opportunity for these juniors and amateurs to see what it’s like out there and meet Neymar, if they’re lucky enough.” After Thompson’s 11-year spell with the Melbourne Victory ended, he said one of the best things is being able to take advantage of the opportunities that weren’t previously logistically possible.

“It’s good,’’ he says. “A lot of opportunities are coming my way that I wouldn’t have been able to take by being a pro-footballer and having the schedule that I did.

“My career opened a lot of doors, and doors that I can actually go through now because I have the time. It’s exciting.”

Now 38, Thompson hasn’t stopped playing. On the books of Victorian NPL 2 side Murray United, he can get on the indoor court. On top of that, he’s become an ambassador for the FFA’s ‘Miniroos’ and is loving every minute - “It’s great that I get to work with the kids.”

“I’m grateful,’’ he says with genuine humility. “I’m really grateful that I had a career that allows me to try these new things.” Over 220 games for Victory, so many different boots were worn, but it was the Adidas adiZero Yamamoto edition that hold a special place in his heart.

“I had the dragon ones, and I was the first person in the whole world to actually wear them," Thompson recalls.

The boots haven’t left his side either. “I re-live all my glory days in my living room with them, they don’t get out on the paddock anymore," he says.

To be able to give back to the game and community that loved him so much is reward enough for Archie Thompson. 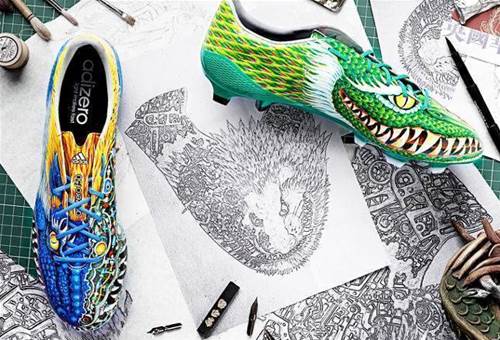 Enter a team to qualify here.