Socceroos coach Graham Arnold has blasted back at Scottish critics who have reacted furiously to his Asian Cup call-ups missing key matches to join the Australian training camp.

Former Celtic star Chris Sutton has led the backlash, insisting Tom Rogic should be allowed to take part in the Old Firm clash on Dec 29 before flying out to the UAE and branding the Asian Cup "Mickey Mouse:

The Scots are angry that the Aussies are being called into camp a full week before their first clash with Jordan instead of jetting in after their club's big league games.

But the Socceroos will face Oman in their final pre-cup warm up on December 30 – and Arnie wants to have the squad assembled for the game.

Under FIFA regulations, the Socceroos can call players in from their clubs from Christmas Eve, but the FFA allowed players to play in Boxing Day clashes before flying them out to the Middle East.

But that has still not been enough for some, with Celtic boss Brendan Rodgers and Hibs boss Neil Lennon voicing their disappointment at the Australia decision.

“I don’t know how much more I can do for the clubs," Arnold told the Scottish Sun. "I feel I’ve been extremely fair in relaxing the meet-up date.

“Tommy and the Hibs boys are missing one game. Using the Fifa rules, it should really be two. Celtic will have Tommy available for a really big away game at Pittodrie against Aberdeen.

“The Australian Federation could demand he misses that, but we haven’t. It’s the same with the Hibs players. They can play against Rangers and then travel.

“Under Fifa rules, I would normally have gathered the players together on Christmas Eve.

“But I am aware that Boxing Day is a big deal for the clubs in Britain.

“I could have made the players miss those games but I didn’t. Instead, I looked at a cut-off point after the fixtures on December 26.

“Let’s also be clear, I didn’t make the draw for the Asian Cup. I didn’t decide when the tournament is held. I didn’t decide the Scottish Premiership fixtures that meant Celtic would play Rangers on December 29.

“And I didn’t decide the Fifa rules that mean we have a right to call players up before the tournament.

“The reality is other nations are gathering their squads earlier than we are and are playing games."

He added: “We have one friendly ahead of a tournament that is our European Championships. What would the Scottish fans be saying if they were in this position going into the Euros?

“I understand clearly the pressure club managers are under and I sympathise, but I have my own job to do with Australia. I have the entire Australian public to answer to. The Asian Cup is a big deal for our country.

“I communicated the message very well to all the clubs. The only club that has really come back to us has been Celtic.

“I understand they have a big game but maybe if they were playing Dundee, not Rangers, then nothing would be said." 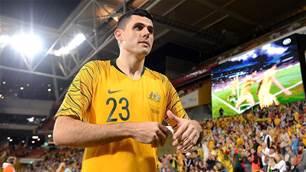