His selection isn't a sign he'll be heading to a fifth World Cup but Socceroos veteran Mark Milligan insists he won't be quitting the national team just yet.

And Socceroos coach Graham Arnold is promising nothing when it comes to the long-term future of captain Milligan.

He just knows the 34-year-old is the right leader for his team at this moment in time.

Milligan was on Friday named in the 23-man squad to start Australia's World Cup 2022 qualifying journey.

His selection ends months of speculation about whether January's Asian Cup would mark the end of his 79-cap international career.

Whether that means he'll still be a part of the team in Qatar in three years at his fifth World Cup however is far from decided however.

"I've obviously had a lot of communication with Mark," Arnold said.

"We've spoken a lot about this type of thing but when I say one step at a time, for now it's the Kuwait camp and making sure that everyone's fit and everyone's healthy and Mark is in great shape and we'll make those decisions as we go further.

"We value Mark and his leadership."

A move to English League One side Southend United in July ensured Milligan was still playing at a high enough level for Arnold to keep the veteran in his squad.

His leadership qualities quickly led to him being made captain of the club shortly after his arrival at Roots Hall.

With 12 players in his squad having 10 caps or less and after Tim Cahill and Mile Jedinak's post-2018 World Cup retirements, Arnold said Milligan's experience would be crucial for the first steps of Australia's qualifying campaign.

"I've come into the job and I've had to create depth and give fresh blood the opportunity and there is a combination between doing that and needing the experienced players," he said.

"Mark is obviously a player whose gone to four World Cups, he's got a great lot of experience with him but he's still playing at a very good level.

"Why can't he help us and work with us for another one camp, one year, two years?" 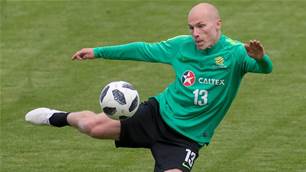