Redmayne will face a challenge for the matchday gloves from Melbourne Victory Lawrence Thomas, despite the glovesman often being overlooked for club duties by Kevin Muscat, and also the returning Mitch Langerak who has been notchng up gametime in Japan.

With Mat Ryan and many of the other Socceroo regulars being given a much needed rest after a long campaign of World Cups, qualifying, Asian Cup and Confederations Cup, it's meant a return for some old faces to prove they are still worthy contenders.

Arnie admitted he had never met former Ange Postecoglou favourite Brad Smith but was keen to see him in action.

"I saw what he did under Ange in the past and he was an exciting player, said Arnie. "He can get up and down on the left hand side and he's got a great left foot on him.

"We want competition for places and Brad is doing exceptionally well in the MLS where he's playing weekly." 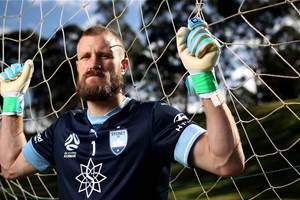 Arnie cited the left back position as Australia's strongest at the moment, with Smith vying with several others including Craig Goodwin who also makes a return to the Roos...but Perth Glory full back Jason Davidson was unlucky to miss the cut.

"He was very close," said the Socceroos boss. "But I see Jason every week - and he's done a great job for Perth Glory. What I haven't seen is Brad Smith close up.

"The plan is to have that depth at every position – and left back is probably our strongest position at the moment."